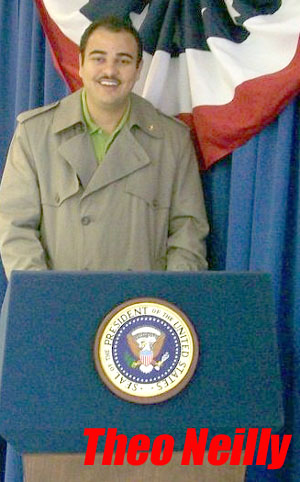 St. George’s Cay, North Eleuthera — Theo Neilly switched from the FNM to the PLP before the election of 2002. He went on the PLP’s platform and verbally attacked the FNM, many of its members and the sitting MP the Hon. Alvin Smith. In return he was well taken care of by the Christie and the PLP with his present job as the manager of North Eleuthera Airport Manager and some other perks.

For the past two years he has been campaigning for the North Eleuthera seat and for a time many did not know for which party. It soon became clear that he was not getting the PLP’s nomination so Theo being Theo did what he does best he switched.

Many wondered why he has switched back to the FNM after saying so many bad things about the party, its members and supporters.  Truthfully, he cannot state a good reason the truth of the matter is he saw his opportunity. Alvin Smith popularity continues to sink and the PLP would not put him forward he made his move. The Problem he faces is while he is a nice enough fellow, no one can really trust him; indeed he has a real credibility problem. The problem is many in the FNM do not trust him and no matter how much Abner and his team try he is just a difficult sell for many. Many days you can see him driving around in the red plated government truck campaigning.

He also has another issue that is plaguing him, his very questionable life style. He has recently started travelling and taking photos with a lot of women, but be real everyone knows. The truth of the matter he is misjudging the people of Eleuthera and Eleuthera is not ready for someone of his life style. Not when there was just recently all kinds a issues with people with questionable lifestyles at the North Eleuthera school a stones throw away from his house.

Many people have been telling Abner to stop pushing this man that the people do not want him. He is nice person overall, but most people especially FNM do not want the man who has a questionable lifestyle and who has torn into the party until he figures he get something from the party to represent them.

There are a number of other persons who are vying for the seat including the present MP Alvin Smith. However, a new person is emerging and beginning to catch the attention of the North Eleuthera community, especially FNM’s. This new person is from Hatchet Bay, he worked for the College of the Bahamas for many years working with young people throughout the country. He is well respected, by most people who know him and has his own business.

He could be seen recently up and down North Eleuthera and what has Theo and his crew worried is that there is a buzz about him. He is generally liked in the FNM and is expected by most accounts to be a candidates for the FNM in 2012. His most recent post is Chairman for the FNM Association of Marathon a position he has stepped down from in August of last year.

Theo Neilly those trying to figure out how he could be campaigning for all these years and have the backing of Abner Pinder and still this person is catching up with him and in fact ahead of him with most FNMs. He has none of the baggage that Theo Neilly has and he has even recently put a write up in the papers in Eleuthera.

Well folks the fight is on in the FNM who will it be Theo Neilly or the dark horse in the Race Collin Ingraham.

Sadly for Theo Neilly, it looks like Collin Ingraham has the momentum.

Meanwhile, the ratification tremors from PLP Rockstar Candidate for the area, Clay Sweeting, is being felt throughout the country. We can tell you Churches from Harbour Island, Bluff, Lower  and Upper Bogues, Gregory Town, Hatchet Bay,  Eleuthera Island Shores, Russell Island, St, Georges Cay and James Cistern were all singing praises and repeating the phrase: THERE IS A NEW DAY WITH CLAY AND WE ARE GOING PLP ALL THE WAY!

PLP Leader Perry Christie spotted the new rockstar just three weeks ago and rolled his PLP machinery into the community to pickup the young 25-year-old candidate.

Christie, Davis and Roberts moved residents with compassion and assured the community that a PLP government will lead the way to economic recovery ALL OVER THE BAHAMAS!