Nassau, Bahamas – PM Minnis does not trust anyone with his political future and these days he is leaving his thoughts with only Dame Marguerite.

On Monday morning Bahamas Press senior editor read a report in the Tribune, which suggested that our report on the stripping of some responsibilities of Minister Romauld Ferriera was “fake news”. This report forced BP to release an apology to both PM Minnis and Minister Ferriera for any injury that our report may have caused.

The Monday 27th edition of the Tribune wrote:

“A document purporting to be from the Cabinet Office was circulated widely on social media over the weekend, claiming Mr Ferreira is no longer responsible for relations with “national and international organisation[s] on matters relating to the environment, the Bahamas Science and Technology Commission (BEST), reefs and blue holes, international convention[s], treaties, protocols and agreements relating to the environment, the Plant Protection Act, wild animal and bird protection and natural history specimens.”

“The fake document said the matters have all been transferred to the Office of the Prime Minister.

“When asked about this, Dr Minnis said: ‘Fake news have said so many things about me, those things don’t bother me. I’ve told my entire Cabinet just to remain focused, just stay on the highway, you know where the goal, you know what to achieve, just head toward the goalpost. Don’t worry about the sideways and don’t worry about the exit terminals, stay focused.’

“He added: ‘[People] have sent so many documents around… fake news. I know nothing about the document.'”

Our instincts confirmed later that something really wasn’t right about the PM’s response. After all, he was responding to claims that his Minister was under performing, was physically absent for a long period early in the administration and failed to deliver swift action in the case of the environmental damages in the community of Grays, Long Island where a barge capsized near the coast pouring gallons of fuel into the environment. It took days before any representative of the Ministry showed up and almost two weeks before the sitting Minister appeared on the scene. Why? Could it be that Minister Ferreira had no carriage over the matter and thus those who did failed to act?

Sources tell us the Prime Minister became concerned with the performance of his Environment Minister, particularly after he got wind of a serious meltdown between the Minister and a top man heading up a major environmental agency. The PM’s response was to therefore make those ministerial adjustments and assume them under his portfolio.

We at BP would have accepted the PM’s response and run, but oh boy, we trust our sources and we believe them before we believe anything that comes from this Administration.

1. Our deep investigations now confirm that a Cabinet Conclusion penned the directives to remove from under the portfolio of Minister Ferreira the listed responsibilities above – WHY LIE?

2. That directive was written and sent to The Governor General of the Bahamas Dame Marguerite to inform the GG that “national and international organisation[s] on matters relating to the environment, the Bahamas Science and Technology Commission (BEST), reefs and blue holes, international convention[s], treaties, protocols and agreements relating to the environment, the Plant Protection Act, wild animal and bird protection and natural history specimens” were all to be transferred to the Office of the Prime Minister for Prime Minister Dr. The Hon. Hubert Minnis to be charged with these responsibilities – WHY LIE?

3. By that Cabinet Conclusion Bahamas Press has obtained a copy of the said instruction which was ordered to be published via the EXTRAORDINARY OFFICIAL GAZETTE of THE BAHAMAS dated 22nd August, 2017 – WHY LIE?

4. And we at BP – unlike the Tribune – can report that that Official copy of the Instruction of the Cabinet has been widely circulated and supplied in hardcopy [NOT ELECTRONICALLY] to all Permanent Secretaries who are informed of the same. – WHY LIE?

How is this “Fake News” when the agencies discussed are in the remit of the Prime Minister?

And how is this “FAKE NEWS” when it is published in the official Gazette and shared with all senior officers of the Government?

And if the Prime Minister insinuation is that these areas assigned in the August 22 Gazette are not true, we call on the PM to show us a follow-up Gazette edition which to reverses this published decision of his government!

BP doubles down on our earlier report and confirm wholeheartedly that Environment Minister Romauld Ferriera was stripped of responsibilities of his Cabinet Portfolio and the Minnis-led Cabinet agreed on that decision more than three months ago! 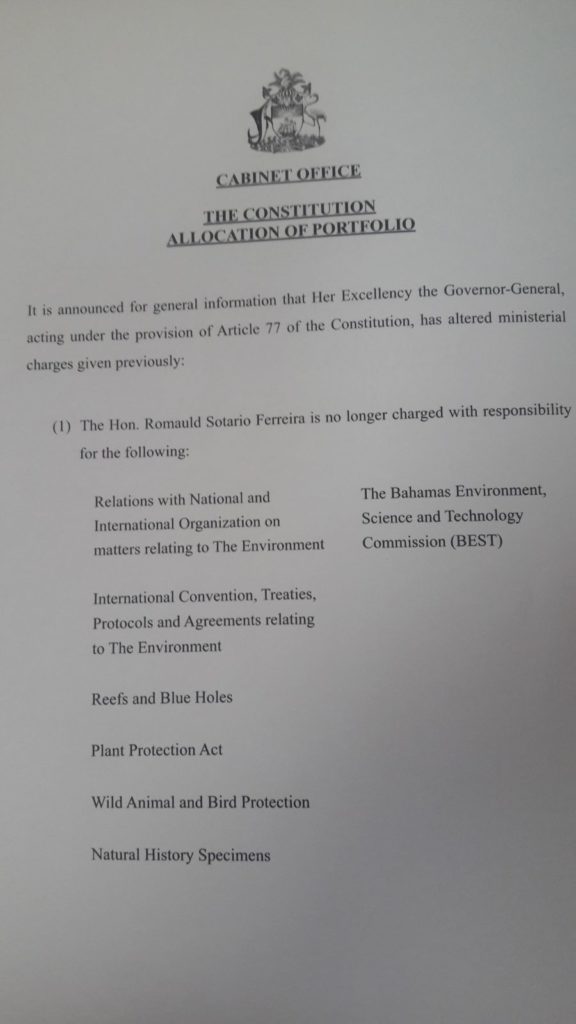 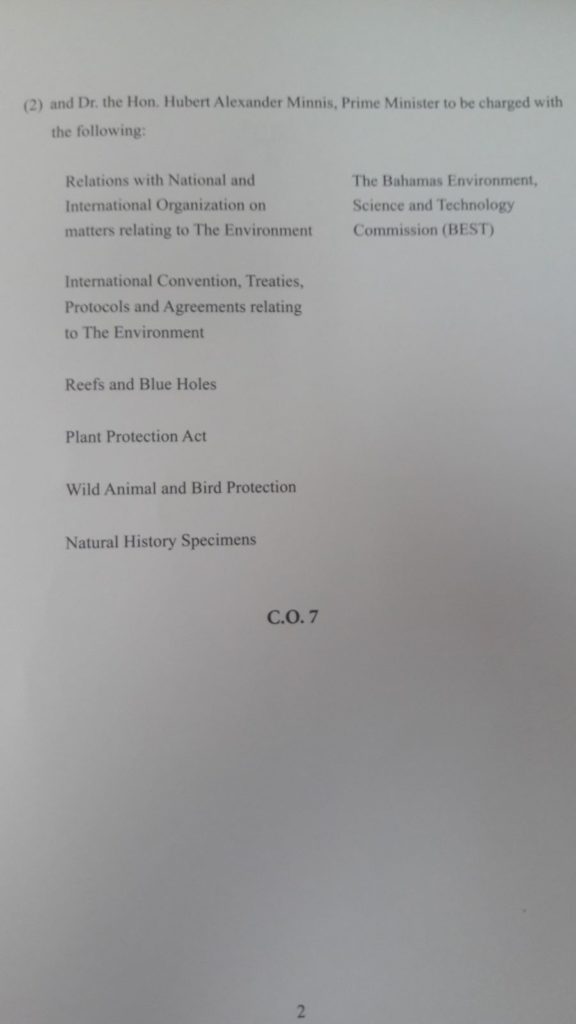