Riders are leaving buses half dead and injured for life in the country – Stiffer Controls must be had against jitney drivers! Mama is waiting 12 hours to see a doctor?

BREAKING UPDATE ON BP >> Here are the photos only Bahamas Press will show you of that #21 bus which slammed into a poll over on East Street today [Tuesday].

BP was a passenger on the bus, when the incident occurred and a young woman who sat in the front seat was badly injured along with other passengers.

In a photo here exclusively on Bahamas Press, here is the ‘pissy’ drink driver of the bus. The incident took place on East Street near the first corner from Supervalue.

The reckless driver first hit a pole by the Guinness Lounge and then drove to this location after leaving the scene of the accident to evade authorities.

People on-board were hurt and a young woman is still in hospital up tp press time. She arrived via ambulance with her face swollen up, arm fractured, with cuts and glass splinters in her eyes. WHAT IN THE HELL IS DIS?

“This is the worse bus driver I have seen since I was a child. I mean the drivers today are reckless – and they have no patience for the elderly,” one regular driver of the jitney told BP.

Bahamas Press has identified the driver as Dwight ‘Drunk Again and Always’ Deveaux. He was behind the wheel when the incident unfolded.

BP had left the breathalyzer home to test the dangerous levels we knew was emanating from the breath of the driver following the ordeal. But what was clear was the fact that the bus driver could barely stand; visibly ‘Pissy-Drunk’ and holding a cloth.

The lawlessness on buses across the country is getting worse by the minute. Some time last week another route 21 bus appeared like a nightclub in the midday; as the bus driver played loud music and smoke marijuana uninterrupted in a packed bus. The smoke was enough to fill Christ Church Cathedral like a deadly London morning fog. The inhale was so strong three students ‘LATE AGAIN’ for school could not walk straight and a pensioner was left catching flies with her mouth wide open as she fell asleep, knocked out cold and taken into the spirit world up to cloud 10.

In another reported incident we are told bags of weed and purple haze are being sold on a bus that is in the Carmichael Road route; the same area where the Gold snatchers lay wait.

During a hot summer while BP was standing outside St. Agnes Anglican Church watching to see what the people in Ted Sweeting Funeral Home was doing with a body inside; a gunman held-up a bus headed up town on Baillou Hill Road – right before our eyes in big broad day light! The gunman made good his escape through a track road after firing two shots in front of women and children; leaving a woman hollering in a panic attack while others began praying out loudly in the streets like the Pharisees!

All BP is saying is this: if children are getting knocked down, old people run over, senior citizens robbed and young girls raped on buses – WHO IN THE HELL IS POLICING THE LAWLESS BUSINESS?! Buses in the Bahamas Needs a Central Organized Management System!

Where are the healers of the nation? PMH needs more doctors in the Emergency Room!

The poor are suffering and in some cases dying in the Emergency section at the PMH waiting to see a doctor!

Meanwhile, as BP was wrapping up at the maternity ward crime scene at PMH, more incidents at the hospital were unfolding.

Since 2 AM in the morning, ailing victims were still sitting in the trauma section up to 2pm Tuesday afternoon – What in the hell is this?

And if that wasn’t enough, while BP was counting – on fingers, toes and rocks – the many patients waiting to see a doctor in the emergency section fof the PMH, we could not believe how only two doctors were attending to patients.

The The emergency section of the PMH looks as if the dengue disease is back and is in full swing! People sitting in the corridors, hollering in the beds, throwing up in the chairs. The scene was as if we were in central wartime Syria!

And before we knew it, we were being called into a room where one Dr. Heild had just slipped and fell hard on her back [BBBBBBBBRIGGERDUM BAM!] was the noise as she looked bewilderingly into the roof twitching with pain!

The doctor had been on her legs all day – which gave way perhaps after someone was mopping piss off the floor. The shift demands at PMH are great – by the time served to treat patients appear getting longer by the day. The small female doctor was severely injured, as she screamed with pain in her back, shoulder and legs – Someone told BP she also screamed the word – “INDUSTRIAL”. We hope her NIB payments are up-to-date and that someone with Cargill ways don’t thief her money.

All we say is this – someone needs to go to that Princess Margaret Hospital and invoke the spirit of healing on the sick. The person up there needs Dr. Jesus NOW! 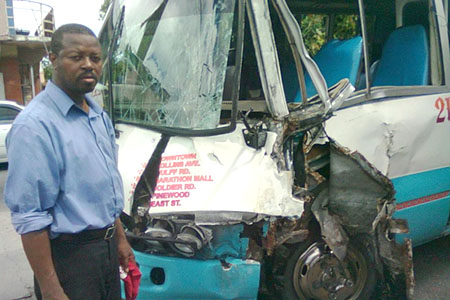