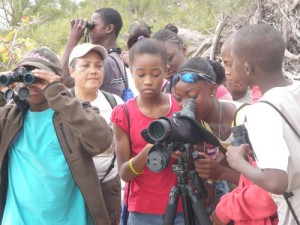 The Students learned about the coastal ecosystem which provides the foraging and nesting habitat for many shorebirds, acquired shorebird identification skills as well as shorebird monitoring protocols. Classroom sessions on shorebird identification and invasive species were combined with field experience as the students visited the rocky shore and collected specimens to be examined at the wet lab at the station and conducted point counts and sites along the shore.

Students discussed how The Bahamas should deal with issues that threaten shorebirds such as coastal pollution and invasive plant species such as the casuarina by participating in a role-playing exercise where they assumed the roles of government ministers and conservation agencies.

The BNT will continue working with the students to increase their skills so that they can support monitoring efforts for species such as the endangered Piping Plover (Charadrius melodus). Recent surveys indicate that The Bahamas may be one of the most important wintering areas for this critically endangered species.