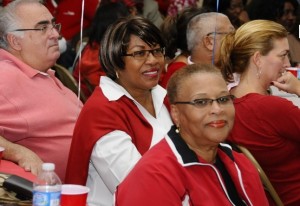 What secures our democracy is an adherence to the rule of law as well as transparent and accountable governance.  A recent statement by the Opposition once again demonstrates their often fleeting acquaintance with these pillars of democratic governance.

All Bahamians Must Abide by the Law

The FNM has gone to extraordinary lengths to preserve jobs at BTC, as well as to agree to a partnership with C&W which will make Bahamians shareholders in the new company.   We have and will continue to act in good faith.

As the Government of the day, we also have an obligation to uphold the rule of law.  In accordance with that solemn obligation, we will act in an appropriate manner, consistent with the law, if any of the unions in the BTC dispute seek to act in an illegal manner in contravention of our labour laws which are clearly enumerated in the Employment and Industrial Relations Acts.

We expect the Opposition to support the Government’s legal actions and oppose any actions by the Unions not in accord with the law.  Failure by the PLP to support the rule of law, will clearly demonstrate what their intensions are as regards to current debate on BTC.

PLP’s Lack of Transparency and Accountability

In the matter of the PLP’s proposed fire sale of BTC to the phantom entity Bluewater Ventures, the Government noted in a recent press statement:

“Firstly, it is not possible to know who Bluewater is because there is no history to refer to.  Bluewater was a shell company registered offshore in Jersey in the Channel Islands, and was established in 2003, 140 years after Cable & Wireless commenced operations.  It had no financial statements and no organizational support.  It only had 2 issued shares of 1 UK pound each. It was previously called Bluewater Communications Ventures Ltd.  It changed its name to Bluewater Ventures Ltd. removing the word “Communications”.

“As far as we know, given the 2 shareholders are nominee companies, its principal is one individual foreigner who used to be in a communications business, NTL, which went into bankruptcy in 2002.  We don’t know who the shareholders are, as this information was never provided to us.  It is mind-boggling that a decision was once taken by a Government of The Bahamas to sell BTC to this entity.  It is even more astonishing that there are those still bold enough to publicly tout this experience today.”

In marked contrast the FNM has agreed to partner with Cable and Wireless, a reputable company with over a century and a half in telecommunications, publicly traded and is in good financial standing around the world including across the Caribbean.

The Government publicly announced the Memorandum of Understanding with Cable and Wireless the very day it was agreed.  Further, the details of a partnership will be debated in the House of Assembly in the full sight of the Bahamian people, unlike the PLP’s closed door dealing which never saw the light of day.

The FNM is Government in the Sunshine, as opposed to the smudgy and hazy dealing by the PLP on deal after deal, with Bluewater as the latest troubling example.