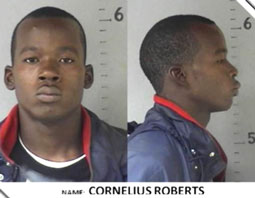 Nassau, Bahamas — Due to the hard work and dedication by officers of the Royal Bahamas Police Force, investigations have led to the arraignment a stone cold killer suspect who has been on the run since May 2013. That suspect, Conelius Roberts Rashad Clarke, is in court this morning (Monday 24th March 2014) on a number of serious charges.

The 23 – year old male of Hope Gardens, who some regard as a terrorist, has been charged by police for following offenses:

• The murder of Amati Knowles and Odrick Telusma which occurred last year in the Kemp Road area.

Now you would remember Knowles and Telusma were gunned down on Whit Monday last year. They were both shot dead on the north side of Bar 20 Corner. It was recorded at the time that two suspects – driving a stolen Dodge Ram – drove into the area and shot the pair.

Following that incident the terrorists, then drove onto Mt Pleasant Ave. and shot three more males in their bloodthirsty quest to kill victims.

Clarke was also be arraigned on:

• Assault with a Deadly Weapon

• Possession of a Firearm

And Threats of Death!