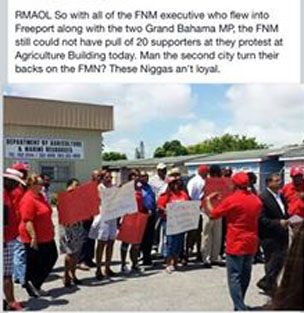 Freeport, GB – Someone high up in the FNM must be telling party supporters not to follow Hubert Minnis. The opposition and executive members flew to Grand Bahama today to protest against Minister V. Alfred Gray. But get this: counting the media on board, along with executives, only 20 persons showed up.

With all the pressing issues on Grand Bahama, the neglect and abandonment of the opposition once again proves no one is checking for PAPA DEM PARTY!

The group looked pitiful and defeated after the poor turn-out as one supporter told BP, “Boy, from the looks a things, perhaps we made a mistake last year November.”

The opposition is calling for the resignation of Minister Gray over a matter in Mayaguana. However, many still believe the actions of the opposition is premature as an investigation has been called into the matter where Gray stepped down as Minister for Local Government.