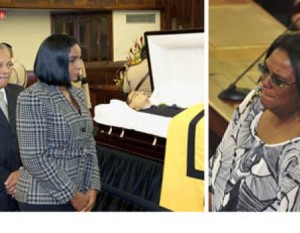 The first of five days of public viewing opened yesterday in the East Wing of the country`s Parliament. The body of the 48 year-old leader, who passed away on October 23rd following a battle with pancreatic cancer, was viewed first by his family including widow Mara, daughters Misha, Oya and Osa-Marie, mother Margaret Knight, and father Charles Thompson.

They were followed by a large number of officials, led by Governor General Sir Clifford Husbands, Prime Minister Freundel Stuart, members of Cabinet and other sitting and former Parliamentarians, current and previous senators, members of the judiciary and diplomats.

Soon after, regular civilians who lined up around the block got their chance to say goodbye as Thompson, dressed in a blue suit and shirt, with a blue, gold and black tie lay in a cherry wood casket.

Viewing for Thompson will continue today, Friday, October 29th at Parliament building in Bridgetown from 9 a.m. and  at Combermere School from 2 p.m.

PM Thompson is set to be laid to rest next Wednesday at St John`s Parish Church following a ticket only public service at Kensington Oval from 9:30 a.m. on November 3rd. The state funeral will be broadcast live on CBC radio and television, and television coverage will be carried live to the Eastern Caribbean by the Caribbean Media Corporation. All schools in Barbados will be closed next Wednesday, and businesses will be expected to close until 1 p.m.

Belize Government takes back its telephone Corp. Hubert selling ours