Mr. Christie pointed out that politics takes second place to the central issue of moving the country forward, and he invited all to join in moving the Bahamas forward.

Also travelling to Grand Bahama were several senior members of the Cabinet who are tied to the Urban Renewal Programme.  They Included the Hon. Philip Davis, Deputy Prime Minister and Minister for Urban Development and the Hon. Dr. Bernard Nottage, Minister for National Security. 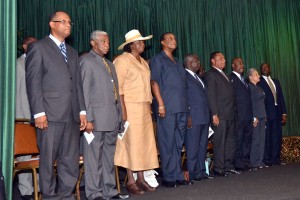 Others on the platform included Minister for Grand Bahama, the Hon. Dr. Michael Darville, who officially welcomed the gathering; Tourism Minister, the Hon. Obediah Wilchcombe; and the Hon. Glenys Hanna Martin, Minister for Transport and Aviation.

The Hilton Outten Auditorium off Settlers Way was filled to capacity, including executives from the Grand Bahama Port Authority, religious and community leaders, businesspersons and others came to hear from the country’s leader in just his second official visit to the island since becoming Prime Minister back in May.

Mr. Christie also touched on the economy of Grand Bahama saying that he is hoping that in the not to distant future, “sooner rather than later” he would be back in Grand Bahama as the bearer of good news.

“I am very optimistic as to some of the things that I am doing, some of the experiences that we are having, and I want you to be encouraged with the knowledge that we are not just focusing on the social, be we have equally a strong commitment to making things happen for the economy,” he stated.

Prime Minister Christie said he is pleased with the work being carried out by the Royal Bahamas Police Force.

He told police officers assembled that “the level of police intelligence will be greatly assisted and strengthened by the work you do to uplift the lives of people.”

The Prime Minister reminded the officers, inclusive of Commissioner of Police Ellison Greenslade that they will be under a watchful eye in terms of carrying out the Government’s policy.

Further, he said, “we believe that if we continue to give these special people who I have spoken about, the resources, they are going to stop these young men in particular, who believe they could kick down people’s doors and shoot whoever is in the place.

“We are going to create a different culture in this community because they are going to know the police is there, all over the place, all the time and we are going to break the backs of it, Commissioner. That is the confidence of which I speak.

“And as I said to you (Commissioner of Police) that if I have to give you one hundred cars between now and eighteen months’ time to do this, that is what we are going to do.  But I want to know that every night, and for that matter every day, there are cars on the road that are marked, and unmarked. And I want the fellows to know that if they getting up something out there it will come at them from that side and that side” he said, pointing left and right.

Continuing the Prime Minister said that “we are going to make this the best little country in world.  We are going to bring crime under control because we have too.”

Mr. Christie said that it cannot be acceptable to anybody that these fellows could feel they have the right to move into neighbourhoods and ruin the lives of families.

Telling Bahamians that his government will make every effort to do it right, Mr. Christie also sent out a challenge to all political leaders on Grand Bahama.

The Prime Minister went on to acknowledge the presence of many religious leaders in the audience and pointed out that Urban Renewal has been a programme that has involved the church in a very meaningful way because they felt the church is able to look at the programmes through eyes that are not politicise and that they should play a big role in Urban Renewal.

Mr. Christie reminded his audience that they were elected on a commitment to bring about change in The Bahamas.

He added that what is important about the team that he now leads is that one or two will fall away from time to time as their political career reaches the twilight of their lives.

“But we have such depth now that when we say we have something that goes to 2030 it means that there are going to be people who when I demit office, they just going to be able to tie it on stronger.

“And so it is important that you and they understand that our politics must always take second place to central issue of moving The Bahamas forward,” he stated.

Prime Minister Christie in introducing both Mr. Algernon Allen and Mrs. Pratt to the audience, spoke of the deep passion each has for the country and their willingness to assist Bahamians and to help grow this nation.

Mr. Christie told the gathering that for Urban Renewal to work it has to be above politics.

“I have the responsibility as Prime Minister of governing the Commonwealth of The Bahamas. I have to call on all of the people regardless of their politics to understand that to the extent that The Bahamas will be successful is directly related to the extent that they are prepared to heed the call of Dr. (Bernard) Nottage in getting involved to make things happen.

“So when I walk into an area, it isn’t for me when I make the call to say if you are PLP step forward, if you FNM step behind.  And the Members of Parliament in Grand Bahama, all of them should understand that, that it is bigger than them.

“It ain’t about me! We are all in transition!  This is about establishing a culture in this country where young men know if they walk into somebody’s house and rape them or try to rape them they will be caught. They will be punished, and severely punished,” he said.