Ingraham says its time to even the score and win four

Nassau, Bahamas — Of the seven general elections held since Independence, the FNM has won three, and Its time for us to even the score and win four, FNM Leader the Rt. Hon. Hubert Ingraham said Thursday night.

Today we assemble here at Mt. Pleasant Green Baptist Church to give thanks and to express appreciation to the Bahamian people for entrusting us with the responsibility to manage their affairs of state.

Today we observe the 18th anniversary of that momentous day when, after 22 years of struggle in opposition trenches, division in our ranks and four successive general election defeats, our Party, the Free National Movement finally won a General Election. 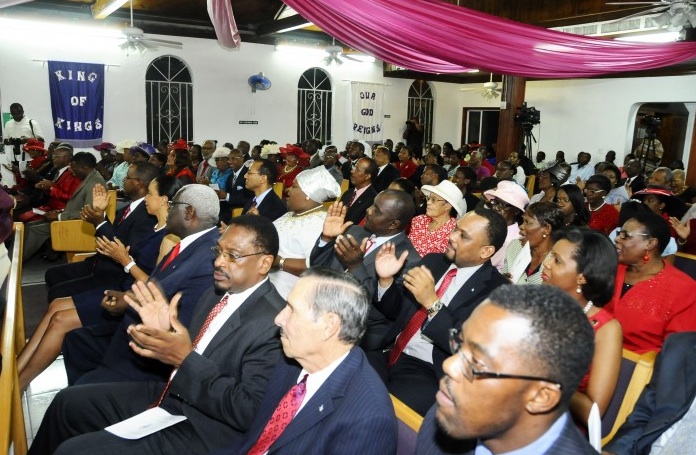 As I stand before you tonight in this sacred place, on this special day, I recall words of a hymn penned by the late Carl Gustaf Boberg, a Pastor, editor and member of the Swedish Parliament. As the story goes, Mr. Boberg was enjoying a peaceful walk when a thunderstorm suddenly appeared. When the storm was over, Mr. Boberg looked over a clear bay and in the distance he heard a church bell ringing. As he listened, these words came to his heart: “O Lord, my God, when I in awesome wonder, consider all the worlds Thy hands hath made, I see the stars, I hear the rolling thunder, Thy power throughout the universe displayed. Then sings my soul, My Saviour God to thee, How Great thou Art, How Great thou art.”

On this the 18th anniversary of our election as the governing party we can truly say to Our Lord – “How Great Thou Art”.

In office we did that which we promised and the Bahamian public rewarded us by re-electing us to a second consecutive term with an increase in the popular vote both numerically and proportionally, and with an increased number of seats in Parliament. Indeed, in our second term every constituency in Grand Bahama and the Family Islands but one, elected an FNM MP – a feat never before achieved by any other political party.

Upon coming to office in 1992 we faced strong head-winds: unemployment was at 14.8%; tourism product – run-down and out-dated; infrastructure – poor and inadequate; Bahamian and foreign investment at its low-point; our image badly tarnished internationally, governmental monopoly of the airwaves, and widespread political victimization.

But, we were called upon once again by the Bahamian people to serve on May 2, 2007 after only a single term in office by our opponents.

The public had tasted what we were like and what kind of government we were, and they called us back to service.

Of the seven general elections held since we became independent, the FNM has won three. Its time for us to even the score and win four.

At the heart of our agenda in each term in office has been improving the quality of life for all citizens.

Today we are facing severe economic head-winds. The crisis is global. It is a tsunami not seen in more than 60 years. Notwithstanding, we remain fully committed to the fulfilment of our promises for we are the party which says what it means and does what it says. We are putting in place the fiscal platform and physical infrastructure needed to stabilize our economy and prepare us for new growth as our economy recovers and for jobs. And believe you me, it will happen. There is much work to be done in creating jobs, expanding the availability of affordable housing, in combating crime and in easing the pain of the many who are suffering. We continue to invest in social development and in securing the well-being of individuals, families and communities in health care, education and housing.

On this the 18th anniversary of first coming to office, let us renew our covenant of faith with the Bahamian people. And, let us rededicate ourselves to caring for God’s people and God’s creation.

On my behalf and on behalf of all FNMs I extend sincere thanks to Rev. Dr. Wesley Thompson and to the congregation of Mt. Pleasant Green Baptist Church for agreeing to host us here in their place of worship this evening.

Also, I wish to extend my personal thanks to all the FNM faithful who have stuck with and supported our Party throughout the many years, through thick and thin, in good times and in bad.

Finally, permit me to single out for special thanks the women of FNM, the backbone of our Party to whom I am most grateful. Thank you.

Thank you and God bless our beloved Bahamaland.