NASSAU, The Bahamas – “We Can Change the World,” sung by St. Anne’s High School Choir, was selected winner of the Song Competition for the 19th Conference of Commonwealth Education Ministers (19CCEM). The song was written by Sammie “Starr” Poitier, and the choir was directed by Darryl Hurston.

In second place was the song, “Teacher Appreciation,” written by Alvin Simms (aka ‘Papa Smurf’).

And in third place was “Quality Education” sung by the Albury Sayle Primary School Choir, led by Sonovia Pierre, and co-produced by Felicia Cartwright and Ms. Pierre.

The Hon. Jerome Fitzgerald, Minister of Education, Science and Technology,

announced the winners during a ceremony in the Ministry’s foyer on Friday, December 5. Senior Education officials, the 19CCEM Coordinating Committee, school administrators, teachers, parents and well-wishers cheered the champs as two of the three finalists performed their winning entries.

Twenty songs were submitted from group and choir entries for the competition, which was launched on September 5. Writers and composers were required to write on the theme of 19CCEM “Quality Education for Equitable Development: Performance, Paths and Productivity”. Ten finalists performed their original songs on a taped television show. The public participated in the competition by voting for their favorite song via Facebook.

The judges were Quincy Parker, Composer, Guitarist and Journalist; Audrey Dean-Wright, Caribbean music expert; and Christine Gangelhoff, Associate Professor and Coordinator of the Music Department at the College of The Bahamas.

In his remarks, Minister Fitzgerald said the Conference is of “utmost importance” to the advancement of education in The Bahamas and the Commonwealth, and the songs will serve as a constant reminder to the world that The Bahamas was the host country for the 19th CCEM.

He emphasized that the winner will be featured during the 19CCEM, which will be held from June 22- 26, 2015 at Atlantis Resort, Paradise Island. “The songs of the finalists will travel the world over as all participating countries will receive a CD of the songs; so you will become musical ambassadors of our country,” said Minister Fitzgerald.

He thanked the participants for their hard work and for creating songs that will highlight the theme and focus of such an important occasion.

Minister Fitzgerald also encouraged Bahamians to embrace the 19CCEM as this will be “a-once-in-a-lifetime opportunity”.

He underscored that the meeting will: increase the understanding of Commonwealth Ministers and Senior Officials of critical issues in education; examine barriers to equity, access and quality education and identify key enabling factors to address these issues; gain the commitment of Ministers to specific actions identified at the Conference; and discuss the process for aligning plans and strategies to support the achievement of the new goals and targets of the Post-2015 education development framework within the Commonwealth’s priorities, processes and platforms. 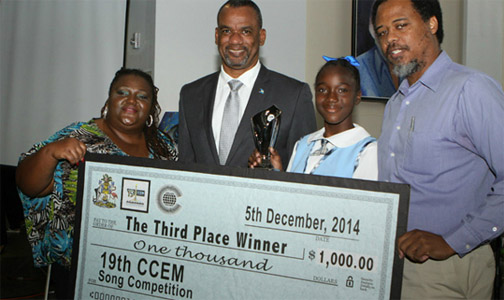