Latest incident woke up once again Whites Road in the Kemp Road area – less than one week following another homicide….

Nassau, Bahamas — Bahamian are hunkering down and barricading themselves inside their homes today after newsbreak of another killing in the Kemp Road area last night.

Breaking News coming into Bahamas Press have confirmed there was another homicide on Whites Road off Kemp Road.

Now you would remember just this past Saturday there was a shoot out with authorities in the area and BP was live in the crossfire.

And then there was the shooting of two residents of the area both of whom lost their lives two weekends ago. Both victims were relatives.

BP’s investigative team was on the ground last night where we can confirm a male victim his died in that incident.

Today police are appealing to all residents in the area to come together and fight against the criminal elements attempting to destroy their community.

Right now police need all our help to locate the suspects involved in this latest homicide.

From our team on the ground we can report the incident started around 9:50pm, where once again there was a game in session.

The victim was playing a game of dominoes with a group of men in the vacinity, when he was approached by two men in a dark coloured Honda Accord vehicle, who shot him multiple times and drove off.

The victim succumbed to his injuries at the scene. The victim we know is indeed a resident of Lyon Road

This is the third homicide in 24-hours and the 83rd for the year.

As we noted, just over a week ago another homicide incident through that same corner took the life of 17-year-old Rodero Munnings. He will be buried on the weekend. Just days earlier his relative, Omar Moxey, the 21-year-old of St. James Road in Kemp Road,  was fatally shot along with (2) men ages 49 and 24 years at Potter’s Cay Dock.

Bahamas Press can tell you funeral homes must be having a field day with all these senseless killings in the capital.

All of the men became recent homicide victims here in the capital. Boy I tell ya. They say CRIME IS DOWN! Yeah – down the road, through the corner, up the street and at a doorstep near you – BP WORD FOR THE DAY! 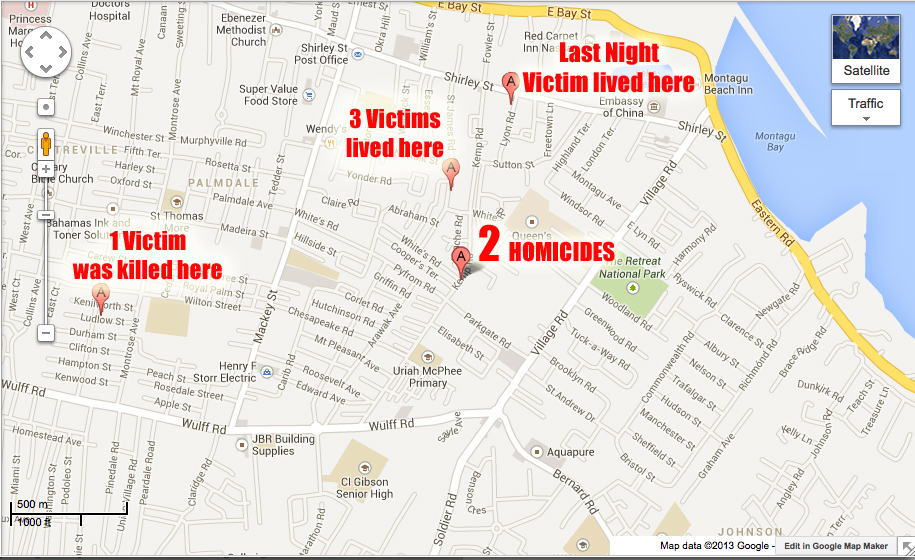