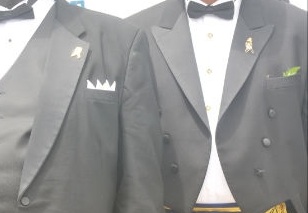 Blue Hill Road was chirping last Saturday evening with plenty Masons leaving their DNA in the Prince Hall Lodge parking lot. Worshipful Master, Uriel Johnson, a.k.a. Da Tief, held a big break down of drunken Masons and sisters on the premises of the historic lodge the night before he held a church service thanking God for him becoming the 54th Worshipful Master of Royal Eagle Lodge.

Sit back while BP tells you of the usual players. At the “All You Can Drink Party” the two drunks, secretary and treasurer, Mai Rahming and Orald Newbold were drunk on the premises as usual and feeling up all the drunk females who came to the drink-out party. These two, who act like Heckle and Jeckle, are the jokers of Royal Eagle Lodge. Any brother asking them legitimate questions about the lodge affairs are always met with the answer, “I don’t know!” However if those same brothers ask Heckle and Jeckle about what brand they drinking, the conversation will last forever.

The Asst. Worshipful Master Earl Francis was also drunk and daydreaming while all the drunken craziness was taking place. One portly lodge brother was seen chasing a scantily clad woman with the fork he was grilling the food with while a next brother was vomiting through the fence and arguing with himself in the dark. He had too much to drink but no one stopped him. What kind of brotherly love is dat??

Meanwhile at the gate, the former Worshipful Master, love sick Juan Bethel. was snatch up and kissing the neck of his biggetty girlfriend, journalist Tanya Cartwright, who was roughing up people who didn’t have the $20 to pay for the drunken ordeal. Mr. Love Sick end up running hot and commanded her to leave before the event was over to no doubt meet him at her house by the sea. He thought it best to get his girl home before one of the drunkards took a fancy to her. The Love Sick Bethel is secretly jealous and at one time booted a whole Mason out of his Cabinet because he thought the Mason had a liking for Queen Biggetty.  Love sick Bethel don’t play when it comes to his woman. BP wants to know what she got so that send one man crazy and have the other one love sick.

BP got tipped off that trouble is brewing in Royal Eagle Lodge as the annual elections approach. There might be a coup forming. The Good Masons are sick and tired of standing on the side lines and having to join other lodges while Da Tief and his Merry Men run the lodge into the ground, partying, drinking and womanizing.

That’s not the only trouble brewing in that lodge. BP was on a ladder peeping through the window and heard some discussions about the animosity building in the Cabinet. Not everyone getting along in there and egos seem to be running the Lodge. So much ego in there that it spilled on the outside of the building which is now labelled with Da Tief’s name. Dis man has no shame!! He tief up da lodge money then put his name on the outside of the building to throw it in the Grand Lodge’s face. Yinna tink they really have not even noticed this?

BP’s pen is running out of ink now so this story will pause here for a while. BP will refill this pen’s cartridge and present part two soon. We have some secrets to tell you about this wutless Worshipful Master, Da Tief. Deep secrets that we sure he don’t want no one to know.

Learning all this shocking information on this “un-worthy” Worshipful Master, BP had to use an ice pack on the head. It was too much to take in all at once. Our file cabinet was over loaded. B.R.B.

WE REPORT!! YINNER DECIDE IN DECEMBER!!