Prime Minister the Rt. Hon. Perry G. Christie signed a Proclamation declaring the week of March 16 – 21, 2015 ‘Forestry Awareness Week’ in The Bahamas and officially opened a Forestry Awareness Symposium at the College of The Bahamas on Wednesday, March 18. A highlight of the symposium was the planting of the national tree of The Bahamas, the lignum vitae on the college campus in front of the Harry C. Moore Library.

Also commemorating the event was the Environment Minister, Hon. Kenred Dorsett. In an address to students at the Anatol Rodgers High School on Monday, Minister Dorsett highlighted the importance of the forest and trees in particular to our very existence and the need to protect them.

“Trees are the lungs of the earth” said Minister Dorsett and “they help us to balance the amount of oxygen and harmful carbon dioxide in the air. Trees regulate humidity in the air. Trees provide us with food, shelter, shade and jobs to help support us and our families.”

Forestry Awareness Week is being celebrated in The Bahamas this week from 16th – 21st MARCH 2015. This event is celebrated globally every year on the 21st March and is designed to educate the public and raise awareness of the significant benefits provided by trees. Civil society is encouraged to plant a tree in commemoration of this global event.

Most of New Providence was plunged into darkness late Friday and the power was not fully restored until Sunday evening. There were reports of a fire at the BEC Blue Hills Power Plant with photos emerging on social media. Speculations about why the blackout occurred were fast and furious, but Deputy Prime Minister Hon. Philip Brave Davis issued a statement on Tuesday about the facts surrounding the island wide blackout.

“I am advised that this (the island wide blackout) happened as a result of a series of events at the Blue Hills Power Station. In the first instance, a 33,000 volt generator cable faulted, resulting in damages to a number of cables and a fire in a cable trench.”
The Deputy Prime Minister expressed his gratitude to BEC line staff who worked around the clock to fully restore power to all of BEC’s customers within forty-eight hours.

“Supplies to 40% of the customer base were restored by Friday Night/Saturday morning, and the restoration efforts continued until all supplies were restored by Sunday afternoon. It was a team effort involving both management and line staff and for this I am truly grateful.”

Of course the root cause of the fire is under investigation but the Minister was clear in pointing out that on the day of the fire that resulted in the blackout, there was no evidence of staff negligence. Usually in these type incidents, the assignment of blame and culpability is reserved for the conclusion of a taproot investigation in the circumstances surrounding this incident.

Compendium of Cooperatives Bills passed in the House this week

The compendium of bills to expand the regulatory framework of Credit Unions under the Central Bank was unanimously passed in the House late Wednesday afternoon with Parliamentarians pledging their full support for the new regulatory regime.

Member for Pineridge, Hon. Michael Darville: These bills are long overdue and will definitely pave the way for further growth of cooperatives in our country.”

Member for South Beach, Hon. Cleola Hamilton: “It is their hard earned money and we have a right to protect it.”

Member for East Grand Bahama, Hon. Peter Turnquest: “There is a common thread running through these compendium of bills before us today and that is one of transparency, accountability and effective internal controls to prevent abuse of the system and resource provided by the Bahamian people.”

The House of Assembly resumes on Monday, 23rd March 2015.

State Minister for Works and Urban Development, Hon. Arnold Forbes said he welcomed a request for a public hearing and review of the contracts issued by his Ministry in connection with BAMSI on North Andros. He believed that the dormitory fire and fallout was a “glitch on the screen;” he reiterated his government’s commitment to transparency and declared that his ministry will be vindicated.

“…I welcome the inquiry. It will show that what has happened with the fire and the situation – there was just a glitch on the screen. You know, listen – this government is about transparency – it’s about putting all the cards on the table; we have nothing to hide about what has gone down at BAMSI and we believe we will be vindicated at the end of the day as far as that is concerned” said Mr. Forbes.

Saint Anne’s member, Hon. Hubert Chipman made the formal request to House speaker Major to have the hearing publicly televised. Prime Minister Christie went further and charged that the committee should expand that probe to include contracts issued under the former administration. He also suggested that there may be a review of the Ministry of Works and Urban Development.

Admitting that there are some irregularities within his Ministry, Mr. Forbes agreed with the Prime Minister’s suggestions. He expressed confidence that Deputy Prime Minister would correct these anomalies.

“There are some irregularities that have been noticed and we (the Deputy Prime Minister and myself) are in the process of correcting those…there is a consequence for every action or every inaction I would say” said Mr. Forbes. He said that the option of discipline or this notion the “heads should roll” is also on the table.

In a show of solidarity, a number of local entertainers including Kirkland “KB” Bodie and Geno Davis addressed the media on Sunday 15th March 2015 to voice their support for the upcoming Bahamas Junkanoo Carnival Festival scheduled for May 2015. Mr. Bodie told the media that after hearing the Prime Minister commit to making the festival Bahamianized, he was sold on the idea and is now fully onboard.

It is nearing Easter so CARIFTA is in the air. The qualifying trials will be held this Friday and Saturday at the Thomas A. Robinson National Stadium. The 2015 CARIFTA track and field championship games will be held from 4th – 6th April in Saint Kitts and Nevis.

It will be a plaid and Polka Dot affair at Sapodilla on Friday night. Family and friends will celebrate the memory of the father of the nation, the late Sir Lynden Pindling who would have been 85 years old on Sunday, 22nd March 2015. His widow, Dame Marguerite the Governor General, will lay a wreath at Sir Lynden’s mausoleum on that day at 9:30am.

The committee responsible for drafting the country’s National Development Plan VISION 2040 was in Grand Bahama this week to consult with the Ministry of Grand Bahama, the Grand Bahama Port Authority (GBPA) and other Non-Governmental Organizations in developing this national policy document.

The TUC met with the Minister of Labour this week to discuss a number of issues including the compendium of Cooperative Bills and the proposed minimum wage hike. The TUC has also publicly supported the government over the implementation of National Health Insurance.

That State Minister for Legal Affairs the Hon. Damian Gomez QC represented The Bahamas at the Inter American Commission on Human Rights (IACHR) hearing into the human rights allegations made by the Grand Bahama Human Rights Association. The hearing took place on Friday, 20th March from 1130 am to 12:30pm in the Ruben Dario Room at the OAS. The event was live streamed on the OAS web site and interested persons could still log on and access this event from the site’s archives.

Miss Bahamas Universe, Tomii Culmer relinquished her crown, resigning due to personal reasons this week. The Miss Bahamas Organization (MBO) released a statement to this effect on Tuesday night and thanked Ms. Culmer for her service and contribution to the organization and the country. 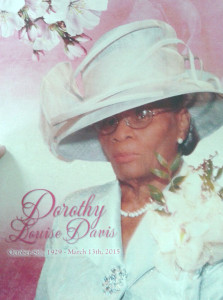 Labour Minister, the Hon. D. Shane Gibson announced in the House this week that the full implementation of National Health Insurance could take between ten and fifteen years. I have been saying this all along. Media reports that the full 5.8% in additional “taxes” as they put it will be levied in January of 2016, was misleading to the public. Only the basic benefits package will be rolled out in January 2016. The Prime Minister indicated in the House during the midyear budget debate that the NHI in South Africa took that country some 10 years to be fully implemented.

On a sad note, Dorothy Davis, mother of Deputy Prime Minister Philip Brave Davis was laid to rest on Friday in a service of thanksgiving at the Zion Baptist Chrurch on the East and Shirley Streets. She was eulogized by Rev. T.J. Morrison.

On another sad note, Dwight Coleby and his #11 seed Ole Miss Rebels from the University of Mississippi were eliminated in the second round of the NCAA basketball championship tournament. They made it to the round of 32 when they fell to #6 seed Xavier Musketeers 76-57.

And on a happy note, the Eugene Dupuch Law School is the 2015 winner of the Caribbean Court of Justice (CCJ) International Law Moot Competition. They have taken the title four times in the competition’s seven year history.

Another 55 migrants suspected of entering the country illegally were interdicted in Abaco in a two-day exercise and were transported to Nassau for further processing. In other news, a Bahamian was arrested and charged in a Marsh Harbour magistrate court with assaulting immigration officers during these exercises.