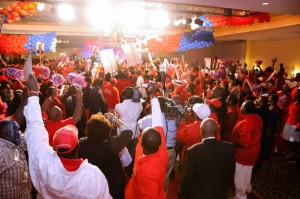 FNMs will not show up at the poll

As a supporter of the Free National Movement (FNM) and a voter in the great constituency of Marco City, I am very disappointed in several political moves that were made on Grand Bahama by the governing party in the past two months.

Like many Grand Bahamians, I was utterly flabbergasted after hearing in the press that the Marco City incumbent will be moving to the constituency of Fort Charlotte in New Providence to run against Progressive Liberal Party (PLP) candidate Dr. Andre Rollins.

I have said before that this move could end up backfiring on Laing and the FNM. Fort Charlotte will be very difficult for Laing or any other FNM candidate for that matter to win.

Right now the mood of the country, particularly in New Providence should be a major cause of concern for every single candidate of the FNM.

True, the constituency of Fort Charlotte has been restructured by the Boundaries Commission.

I am hearing that several polling divisions that are purported to have many loyal FNM supporters have been added to Fort Charlotte.

This was done in order to help the FNM candidate win, according to critics of the FNM.

Having said that, Prime Minister Hubert Ingraham and the FNM hierarchy must certainly know that boundaries don’t vote, people do.

While I appreciate the fact that the final decision on who will be running and where has been settled by the leadership of the FNM, I am still of the view that Laing should have been kept on Grand Bahama, notwithstanding the negative campaign of the PLP public relations machine.

Also, why hasn’t Senator Michael Pintard been given a nomination to run in Grand Bahama?

I find it utterly amazing that Senator Pintard has been given a nomination to run in the Cat Island, Rum Cay and San Salvador constituency, a PLP bastion.

The current Member of Parliament for that constituency is Official Opposition Deputy Leader Philip “Brave” Davis.

Davis is one of the most powerful and influential politicians in The Bahamas. In my estimation, Pintard simply doesn’t stand a chance against the noted attorney. Interestingly, Pintard first ran as an FNM candidate in the Centreville constituency in the 1997 general election. He went up against the present Opposition Leader Perry G. Christie. It seems as if the FNM has a propensity of running Pintard in constituencies he has no realistic chance of winning.

As with the case of Laing, Pintard should have been given a nomination in Grand Bahama. I had heard rumors circulating through the press that Pintard was going to receive the nomination for East Grand Bahama. Instead, the governing party has decided to send the noted playwright and poet to a constituency where the PLP incumbent is deeply entrenched.

I don’t believe that the team the FNM has assembled to contest the five seats in Grand Bahama is going to do well at all. I could be wrong. But as a Grand Bahamian supporter of the FNM, I can tell you that I am not at all impressed with the team Ingraham has put together. As an objective observer of Bahamian politics, I am of the opinion that the five candidates of the PLP are more palatable and impressive to the average Grand Bahamian voter. It pains me to say this, but it looks like there is a dearth of talent within the FNM on Grand Bahama.

In fact, I would even go as far as saying that this is by far the most unimpressive team in the history of the FNM on Grand Bahama. Like many Grand Bahamians, I am not impressed at all. To put it mildly, this is a very subpar team. And this is at a time when many Grand Bahamians have been brought down on their knees because of the worst recession in living memory. I don’t believe that this slate of candidates, if elected to Parliament, will stand up to a powerful company like the Grand Bahama Power Company (GBPC) for thousands of struggling consumers who are buckling under the weight of exorbitant electricity bills.

Moreover, what are the plans of the FNM candidates to nurse Grand Bahama’s ailing economy back to some semblance of health? To be sure, I am not the only FNM supporter who is not at all impressed with this slate of candidates. I have heard a few FNM supporters on Grand Bahama voicing their utter dissatisfaction with this team Ingraham has assembled.

Ingraham might as well have kept Kenneth Russell and Verna Grant on the FNM ticket. I am of the view that the FNM stood a better chance of at least holding on to either two or three of its seats with its 2007 slate of candidates. I don’t believe that the FNM can “sweep” Grand Bahama with this present team. Anyone who sees what is going on in Grand Bahama with respect to the stagnant economy and then turn around and say that the FNM will win all of the seats is unrealistically optimistic.

The way things are going right now, I would even be surprised if the FNM manages to win one seat on Grand Bahama. I have said before that Grand Bahama is experiencing a paradigm shift from a political standpoint. Anyone who denies this is either living on the planet Pluto or is just plain naive. While I am not blaming the Ingraham administration for the economic slump on Grand Bahama, I am still of the view that more could have been done to revitalize the economy. For instance, the FNM government could have built an airport in either West End or East End, Grand Bahama in order to help the sagging tourism industry.

The FNM government is presently building a $27 million airport (Leonard M. Thompson International Airport) in Abaco, so why hasn’t the same thing been done for Grand Bahama, “FNM Country?” My mother was recently unjustly fired from her job at one of the major hotels on the island. She now has very few options because of the situation in Grand Bahama. There are hardly no jobs on this island. I am very disappointed with how things have gone in Grand Bahama over the past four-plus years.

And to add injury to insult, the FNM has fielded a slate of candidates who are nowhere near the quality of the 2007 group of candidates. As it stands right now, the PLP candidates should win at least four of the five seats with their hands tied behind their backs and their eyes blindfolded.

While I will be collecting my voter’s card, I will not be voting this time around. I will use my voter’s card as an identity card, that’s all. The FNM got three valuable votes out of my house in Marco City in 2002 and in 2007. My family had even voted in the Pineridge constituency in 1997 for the governing party. But I can say without hesitation that I will not be going to the polls on election day. I don’t care when PM Ingraham rings the proverbial bell. Also, my brother who has supported the FNM all of his life has vowed to vote against the party. Like me, he too is very unhappy with the candidates the FNM has fielded. The day that the FNM announced that Zhivargo Laing will be leaving Marco City was the day I decided that I won’t be voting at all. For too long now Grand Bahamians have been treated like pawns in a chess game by politicians. For too long we have been taken for granted. This is one Marco City constituent who will be boycotting this election.