In her “Between the Lines” column in THE PUNCH on Thursday, May 26, Nicki Kelly commented on a matter that should be of grave concern to all Bahamians. Referring to the sensational series of articles published last week by the Nassau Guardian based on classified diplomatic cables sent to the U.S. State Department by the U.S. Embassy in Nassau and released to public by WikiLeaks, Mrs. Kelly cited comments made by Prime Minister Hubert Ingraham during a discussion with Brian Bachman, the then chief of the U.S. embassy’s political/economic section.

“The interview took place at Mr. Ingraham’s office on April 8, 2003, a year after the FNM’s defeat in the 2002 general election,” Mrs. Kelly wrote. “What astounds me is that Mr. Ingraham would allow himself to be questioned by the representative of a foreign power on confidential matters relating to Bahamas government policy and the internal affairs of his party.”

Noting that at the time Mr. Ingraham was “a former head of state and a sitting Member of Parliament,” Mrs. Kelly added: “Even more alarming is the frankness of the Ingraham responses, and the highly personal views expressed regarding members of the Opposition and its leader Perry Christie. This speaks to a degree of intimacy between Mr. Ingraham and the U.S. government that should be cause for concern by all Bahamians. In other countries such behavior would be viewed as a threat to national security.”

What makes the concern raised by Mrs. Kelly so frightening is that Mr. Ingraham’s willingness to clandestinely provide the U.S. government with “secret” information on The Bahamas may date back as far as 1983, if a letter that has been widely circulated on Facebook is genuine, and it certainly appears to be.

The letter purports to be a response to a request made by Mr. Ingraham to U..S. Attorney General William French Smith during the presidency of Ronald Reagan. It is dated, Dec. 14, 1983, and addressed to Mr. Hubert Ingraham, United States Embassy (Bahamas), with the stipulation that it be delivered “By Federal Courier).

Here’s what it states: “Upon review of your request to meet with me in a strictly confidential environment, I must unfortunately deny your request on the basis that such a meeting should be arranged through the diplomatic channels of both the U.S. and Bahamian Governments. Your request, whether of a public or private nature, does not meet the diplomatic requirements constituting your position in the Bahamian Government and certainly not in my position in the United States Government.

“While having recently been made aware of your concern about your government’s Narcotic Interdiction policies, I must however reiterate that any meetings between you and I be arranged through the appropriate diplomatic channels of our respective governments.

“Nevertheless, I hope you would still maintain an open relationship with U.S. officials in The Bahamas, while attempting to confront what you consider to be suspicious actions on the part of Bahamian government officials.”

Keep in mind that this was in 1983 when Mr. Ingraham was supposedly still a member of Prime Minister Sir Lynden Pindling’s cabinet. In any other country, such behavior by a top-ranking member of the government would be considered an act of high treason. Indeed, it is clear from the careful wording of Attorney General Smith’s letter that he may have considered what was being proposed by Mr. Ingraham to be treasonous.

To be sure, if a cabinet minister in the U.S. government were caught trying to relay secret U.S. information to another foreign country, upon conviction he or she would more likely than not be sentenced to life in prison without parole. Imagine what the penalty would be in communist countries like Cuba and China.

The question is this: Trusted to do what?

At the very least, Mr. Ingraham owes the Bahamian people an explanation as to why he was so eager to meet with U.S. Attorney General Smith and exactly what information he wanted to share with Mr. Smith that would have benefitted The Bahamas. And at the same time, he should explain why, almost two decades later, as indicated during his discussion with the chief of the U.S. Embassy political/economic section on April 8, 2003, he’s still comfortable sharing Bahamas government confidential matters with a foreign power. 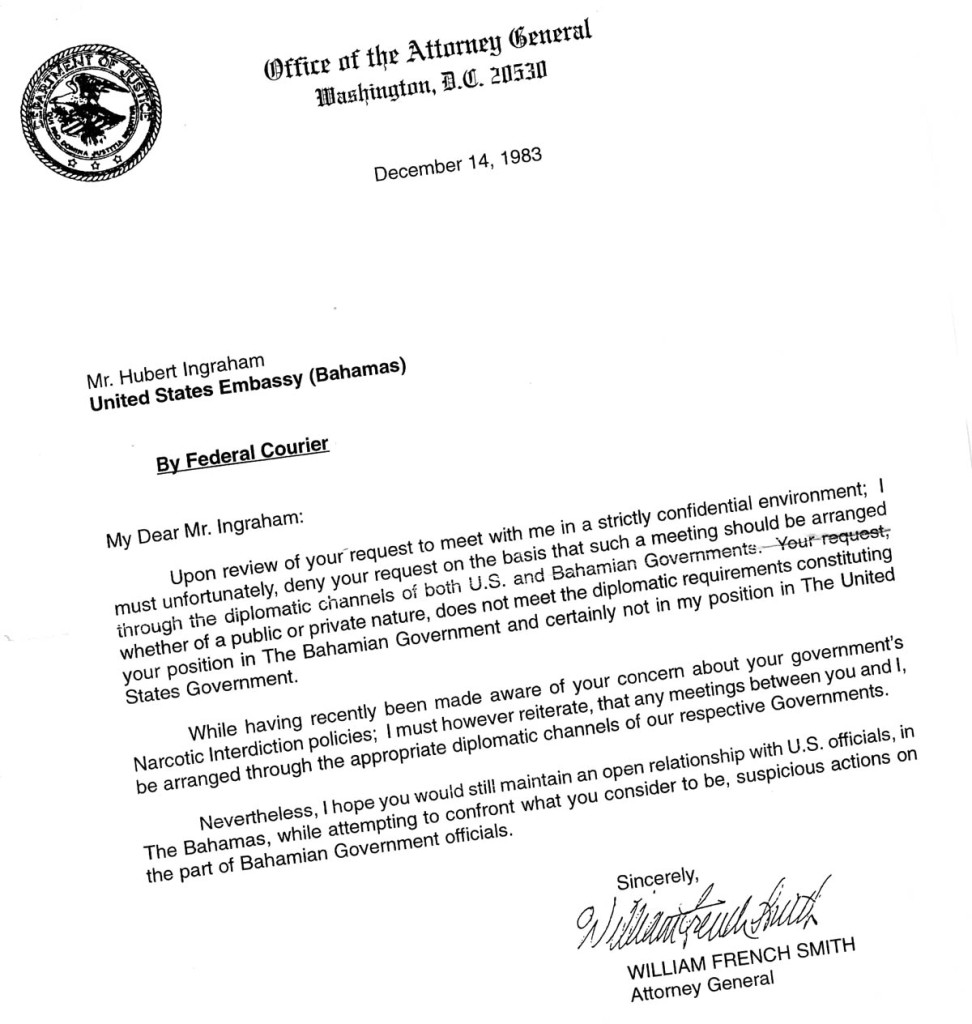