FNM could soon be seen as the RESIGNATION Party… 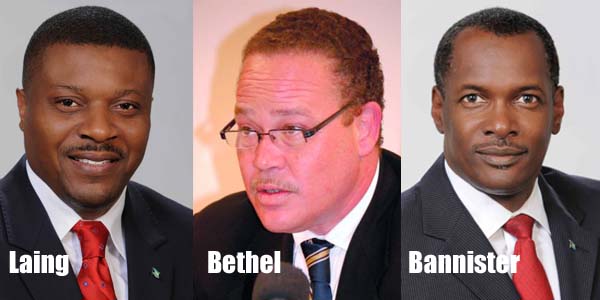 FNMs keep Resigning leaving the FNM defenseless to the Christie deadly political war-chest! Minnis must bring in New Generation of FNM Leaders and save the Wrecked Ship! Party needs an infusion of new blood!

Nassau, Bahamas — A wave of resignations could hit the opposition Free National Movement any day now, as word that another former Cabinet Minister in the former Ingraham Government could call it quits in the Party.

Bahamas Press has learnt from sources deep in the Party that the former MP and Cabinet Minister has fallen on hard times and has now confided his troubles to a friend.

According to a BP source, the former Minister noted how Papa not only made it bad for the Party as he abandoned ship, but he made it even worse for FNMs who had nothing during the last five years and nothing in the next present term of the PLP.

According to the source, the once big time minister has sought a meeting with the Country’s New Sheriff, the Rt. Hon. Perry Christie, who has with open arms and an olive branch welcomed former Cabinet Ministers to his New Day government.

With the resignation of former Prime Minister Hubert Ingraham, the former junior Minister for Finance Laing, and now the Former Minister for Education and Opposition Leader in the Senate, this latest member of the Party could be damning for the organization.

Some say the resignations in the FNM in one 5 years of the Party are more than the PLP has had in 25 years of governance. Carl Bethel resigned. Branville McCartney resigned. Kenneth Russell got fired. Pierre Dupuch resigned. What could be so terrible in the FNM that could cause so many resignation in such a short political history.

“Hubert Ingraham left our party worse than he met it. We are in debt. We have bills left behind since the last election. We have the fights and the squabbles, and now more resignations to come? Man, I see why Charlie left the earth!” An association member told BP

Sands wants the seat in the upcoming General Election. Sources close to him say that they are convinced Sands will not and cannot beat Ryan Pinder, who is a rising star in the PLP. “Pinder is becoming unbeatable, and has grown leaps and bounds politically. He has beaten Sands twice and a third defeat will be humiliating.”

According to sources, Sands expects to take a poll in the constituency and, following those results, he will make his presence felt in Long Island.

Boy, if ya don’t laugh you will cry!