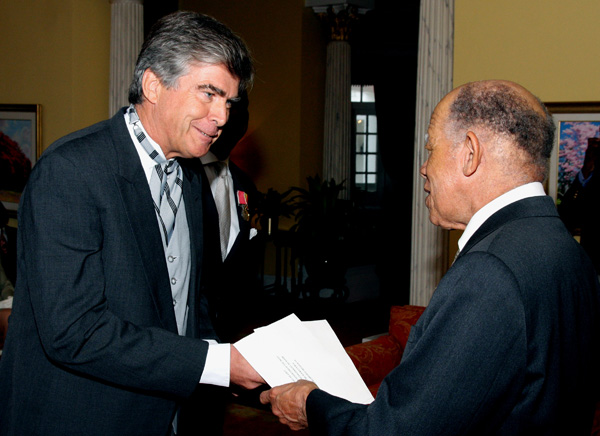 His Excellency Marc-Olivier Gendry, Ambassador of the Republic of France (left), presented his Letters of Credence to Governor General His Excellency Arthur D. Hanna on Thursday, May 21, 2009. (BIS Photo/Derek Smith)

NASSAU, Bahamas – The Bahamas is set to sign the Schengen Visa Waiver Agreement which would allow visa-free travel between the Bahamas and European countries involved.

Governor General His Excellency Arthur Hanna confirmed that move as he accepted Letters of Credence from His Excellency Marc-Olivier Gendry, Ambassador of the Republic of France to The Bahamas, in a ceremony at Government House Thursday.

He thanked the Government of France for its part in the negotiating process, which ends in the signing of the agreement at the end of this month.

“The signing of this agreement along with the Economic Partnership Agreement, which The Bahamas signed in October 2008, and recognising the government of France’s facilitation of the same within the EU body, speaks volume of your country’s resoluteness to ensuing that equitable trade in the region is realised, void of unlikely barriers,” the Governor General said. “The imminent implementation of the visa waiver agreement for Bahamians travelling to European Schengen States will certainly have a favourable effect on the movement of persons and foster further exchanges,” Ambassador Gendry said.

The Schengen countries are Austria, Estonia, Greece, Latvia, the Netherlands, Slovakia, Belgium, Finland, Hungary, Lithuania, Norway, Slovenia, Czech Republic, France, Iceland, Luxemburg, Poland, Spain, Denmark, Germany, Italy, Malta, Portugal, and Sweden. The Bahamas and France have shared “close and cordial” relations over 30 years during which they have remained committed to respect for basic human rights and fundamental freedoms through the promotion of democracy, he said.

“The Bahamas is very appreciative of the support of the French government and the European Union to the African Caribbean and Pacific countries, as a whole, given particularly the benefits that would evidently be derived from a preferential European cooperation,” the Governor-General said.

He acknowledged that French nationals in the Bahamas have made contributions in the tourism and financial sectors through the Alliance Francaise, which also promotes French language and culture.

The Bahamas would also support France in its candidacy for the presidency of the 2009 conference of the United Nations Educational, Scientific and Cultural Organization, he said Ambassador Gendry, 60, who also serves as Ambassador of France to Jamaica, said he was pleased and honoured to serve the Bahamas.

A founding member of the European Community, now the European Union, France is particularly dedicated to ensuring that the ACP countries benefit from a preferential European cooperation.

“This is the objective of the Cotonu Agreement and the European Development Fund, to which France contributes 20 percent and which has substantial funding planned for the Bahamas,” Ambassador Gendry said.

“This is also the objective of the economic partnership agreement signed at the end of last year with the CARIFORUM countries.

“Considerable funding has been put in place in order to help them benefit from the agreement.”