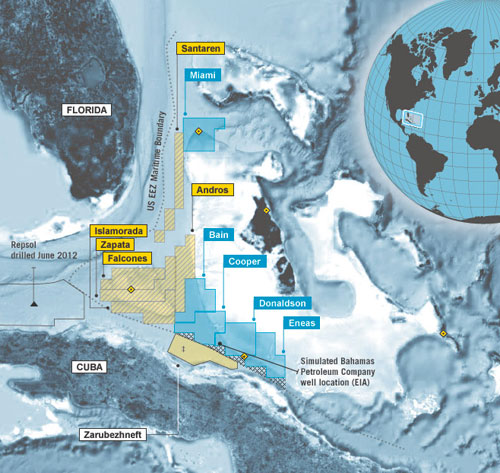 Will BPC tell the Bahamian people how much oil was discovered in our waters since 1987? And explain why were the wells capped?

NASSAU, Bahamas – For the most part, the majority of people don’t realize that oil exploration has been licensed in the region and The Bahamas since the Second World War. Oil and gas companies carried out exploration activities from the mid-1940s through to the 2000s including wells in each decade through to the late 1980s. The major oil companies involved included: Esso (Exxon), Amoco, Tenneco, Texaco, Arco, BP and Shell. Five wells were ultimately drilled between 1944 -1986 and while companies encountered oil in each of the wells, none were deemed commercially viable, and with the declining oil prices of the time the licenses were allowed to expire and interest in The Bahamas as an oil producing nation, waned in favour of other, already established hydrocarbon areas.

After a significant absence, oil exploration possibilities were renewed in 2005 when international oil explorer Alan Burns, who had success in 28 new oil and gas wells globally, expressed interest in seeking again to prove the existence of commercial volumes of oil in Bahamian waters. Bahamas Petroleum Company was formed and today, eight years later, BPC is government licenced for offshore exploration in areas covering some four million acres, predominantly in the Old Bahama Channel between Cuba (25 miles – the nearest inhabited landfall) and South Andros (80 miles).

These Licences have been periodically reviewed between various governments and the company and each time renewed, refreshed or extended by three separate administrations. The eight years of exploration activities are expected to come to fruition with the drilling of an exploratory well during 2015, in conjunction with government’s introduction of newly strengthened and modernised industry regulations that will govern safe exploration and other industry activities.

The Company expects the Government revised industry regulations will reflect the use of current enhanced technologies and the need for industry ‘best-practices’ to apply in line with the changing attitudes and tolerances of society. It is anticipated they will combine best practices as identified in a variety of leading jurisdictions – including new procedures and equipment requirements to reflect the most up-to-date risk management practices – and a mandate on the use of the most appropriate technology for the task.

“We have demonstrated a dramatic reduction in technical uncertainties since we began. Modern technology has leveraged new insight with the acquisition of an extensive 3D seismic database, at a cost of close to $50 million, utilising a type of survey conducted for the first time in Bahamian waters, and when combined with BPC’s unique access to related historic databases accumulated over the years, it provided a significant competitive edge in the pursuit of success.

“Although our years of technical and environmental preparations may not guarantee commercial success they do underpin our ability to minimize the potential impact of plausible threats and guarantee the best chance of realising our goal of fully exploring the hydrocarbon prospectivity of The Bahamas in the safest, most environmentally sensitive manner and I look forward to the near-term future with excitement and confidence.”

“Five oil exploration wells have already been safely drilled in The Bahamas using, by today’s standards, antiquated equipment and technology. BPC does not intend to have any incidents during its activities but in recognizing risks associated with our industry, it is our preparations that I am particularly proud of.

“Through several years of dedicated research and the development of visual representations in the form of Environmental Sensitivity Maps (ESMs) we’ve substantially reduced our environmental impact profile,” said Ms. Quant.

“The maps were created with the help of local islanders, scientific experts, local fishermen, government agencies, local environmental non-governmental organizations, local research organizations and even real estate agencies, highlighting critical habitats, usage, natural communities and wildlife occurrences that may have the potential to be impacted by industry activities, including exploration. For instance, they show us such things as the turtle nesting beaches, blue holes, important birding areas, coral reefs, sea grass beds and wetlands. Fortunately, BPC’s drilling locations are not inside the areas mapped as being or containing sensitive receptors.

But, having established them, knowing where these priority areas are helps us to give precedence to particular responses according to the various needs in order to ensure areas are adequately, appropriately and correctly protected.”

Ms. Quant said that all precautions and measures with regard to any accidental or natural threats to the environment are a part of the company Environmental Management Plan and the mitigation of such risks will be integrated in to operational procedures.

“Our web site and the BEST Commission web site list all the regulatory measures required and met by BPC in preparations for oil exploration.” http://www.best.bs/index.html

Although The Bahamas ability to become an oil producing nation is as yet unknown the country and its people are, in reality, already in the ‘oil business’ thus the incremental risk associated with exploration drilling is modest in the context of the threat profile that already exists around oil-related activities in Bahamian waters.

Oil exploration drilling occurred up until last year in Cuban waters and oil is currently being produced in both Cuba and Florida. There is a long history of crude oil and refined petroleum products being shipped through Bahamian waters and the region is crisscrossed by many international shipping lanes, the Old Bahama Channel alone carrying three million barrels a day (over 120 million gallons), which is likely to increase with the expansion of the Panama Canal and with access to the deep-water port at Grand Bahama; regularly, inter-island tankers carry fuel through narrow, shallow Bahamian seaways. A 21-million barrel oil storage terminal operates in Freeport, Grand Bahama – the fourth largest in the world – which, along with the South Riding Point terminal 22 miles east, are both being upgraded in addition to expanding the oil storage capacities.

Each of these major activities is heavily regulated in Cuba, the United States and The Bahamas and The Bahamas Government is a signatory to many international codes of practice, conventions and cooperative agreements as well as specific maritime legislation. The Bahamas has its own oil spill contingency planning coordination group and is a member of the regional Caribbean coordinated response group.

BPC too is a member of the leading incident response organisation, Oil Spill Response Group, with access to their extensive, global resources. The BPC web site has very detailed information on this aspect of the oil industry. www.bpcplc.com

In the event of an oil discovery that suggests commercial quantities are going to be available for development in the coming years, one of the challenges will be to convert the resource into sustainable economic development for the country and its people.

Royalty revenues will be paid to the government on every barrel produced, which over time, on credible-sized discoveries could add up to billions of dollars without any financial burden to the government or the people of the country – the entire costs of exploration, appraisal and development being borne by the oil company(s). To date, BPC has picked up the total costs of the research and exploration since 2005 amounting to some $80 million and will continue to do so. Some estimates ultimately put the final total cost of development at tens of billions of dollars.

“A commercial oil discovery could significantly change The Bahamas’ economic fortunes,” said Mr. Potter. “The discovery of oil could mean the government having substantial excess revenues to finance multiple options for economic growth and potentially revolutionising the countries energy provision forever. For example, money from oil, if production eventually starts, could be used to fund renewable energy programmes nation-wide as well as infrastructure projects throughout the islands. It could be an incredible position for any government to be in – a fantastic opportunity.”

Simon Potter concluded by saying that the Company is ready to take the next step;

“We are technically ready and environmentally prepared to safely execute the first exploratory well in 28 years targeting oil in The Bahamas. We anticipate government’s updated oil industry regulations, currently before Cabinet, will be on par with the rest of the developed oil producing world and made available to us and the general public very soon.”

For further information, BPC’s Annual Reports and all other company information can be found at www.bpcplc.com and at http://www.best.bs/index.html for the Best Commission to view the Environmental Impact Assessment.