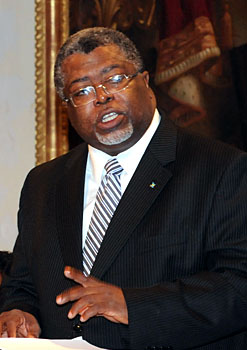 Nassau, Bahamas — Despite achieving a childhood dream, a source close to Sir Michael Barnett says he has already considered stepping down as Chief Justice. However, he has been advised by a close friend to “hang in there” as it is expected that the pressure will dissipate.

Prime Minister Hubert Ingraham and Barnett have been under intense pressure since the August 24th appointment that moved him from Attorney General to Chief Justice within the space of 24 hours.

Adding fuel to the fire, is Sir Michael’s former position as senior partner with Graham Thompson and his involvement with many cases on which he must now adjudicate as the man in charge of the judiciary.

“He is fully aware of how his colleagues really feel about his appointment as Chief Justice,” says a senior attorney. “As a result he appears to be overreaching to garner their support, at least to the point where they don’t openly oppose him.”

Expressing the feeling of many other senior lawyers, he continued, “This is not a good position to be in at a time when the backlog in the courts is unbearable, and many litigants can’t get any traction on cases that go back many years. This is really sad, and it is causing many international attorneys  involved in banking and finance to raise questions about client matters presently before our courts.”

All involved say the opposition to the appointment has never been about Barnett’s qualifications or his competence.

“It is just his political closeness to the present government in general and the Prime Minister in particular, which is causing an uneasiness,” said another senior lawyer. “Justice must not only be done, but must be seen to be done. Unfortunately, many subjects don’t feel comfortable that they will have a fair chance if they had a case against the government, thanks to the political choice to make Barnett Chief Justice.”

Complaining about the backlog and present disarray in the courts during an interview on the Parliamentary Channel, Fox Hill MP Fred Mitchell said he’d reminded the Chief Justice who is also a former high school classmate, that “he (Barnett) had finally gotten his wish (to be Chief Justice)” and now it was his job to fix what was wrong with the system.