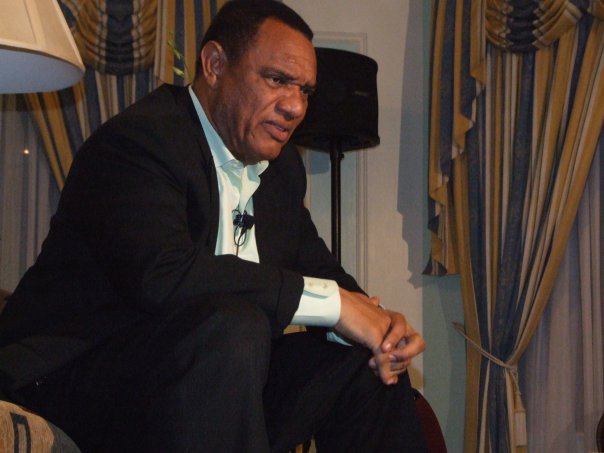 <<< Christie’s anger rushed to a boiling point as an edict is served to him in the comforts of his living room by a 24 year-old PLP embracing CHANGE!

Nassau, Bahamas — A big breakdown in the Christie compound sometime last week stirred passions as a rival contesting Christie in the upcoming convention for the leadership of the party delivered an edict to the outgoing leader.

Bahamas Press learned that the big ‘bustup’ between the Christies and a supporter of the dark horse lasted for almost two hours as they were blasted for their failures inside the PLP.

Young and old PLPs are spitting mad at the state of the party, which is still being led by the leader, who delivered them into opposition becoming the first one-term government ever in the history of Bahamian politics.

A report commissioned by Christie back in 2007 confirmed that the party lost the government because of the weaknesses of its leader. And nothing has changed as the Christies now struggle to grip control of the 50 plus year-old political organization.

“They’ve made us a weaker party than we ought to be in this time. The country is falling apart, everywhere you go people are losing their homes, jobs and their entire livelihood. People’s properties are being taken by this wutless Ingraham government. Look what happened yesterday, the children cannot now get a grant to go off to school anymore, and you can’t hear a damn word about what is going on from Christie,” a diehard PLP told BP. “What is he afraid of, does he want to secure another term for his law buddy Hubert? Why is he not saying anything, is he sick again? Delegates from around the country must now accept that the time for CHANGE in the PLP is now! It is time for the PLP and the Christies to part ways.”

The edict served by the challenger outlined the need for CHANGE in the country and inside the PLP and warned Christie that his failure to resign will result in a bloodbath at the party’s October convention. The Christies have evolved like a dynasty inside the PLP; much like that of the Pindlings back in in the day. And like Pindling we now see them grabbing for power, and are now fighting for their political survival. 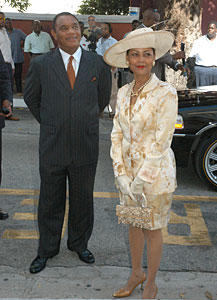 During the two hour ordeal we understand Christie’s wife Bernie was seen screaming like a wild animal shouting to the top of her voice in the living room of the resident saying, “Who do you think you’ll are to challenge my husband!” Bernie we now know is just back home from a six month long trip in Atlanta. Some said the former first lady rushed back home to the aid of Christie after hearing he’s in for the fight of his political life.

Christie we we’re told interrupted the edict being read against him, and began beating his chest questioning the intent of his rivals stating, “I am Perry Gladstone Christie, and who is it who thinks they can beat me? I am the leader of the Progressive Liberal Party and I will lead this party once again!” But that did not stop his challengers as we were told, who continued serving the warning to the Christies. At this point voices began screaming to ‘cussing’ levels under the high summer heat. This was not good for Christie who suffered a stroke back in 2005.

The contender continued serving the edict on Christie, and warned Christie that it is never too late to resign! At this time some members gathered inside the Christie home agreed with the edict, while others began rallying around the PLP leader, saying it was not time for Christie to go.

Bahamas Press has learned that as the person delivering the warning to Christie left, the weak leader of the PLP fuming at the nostrils as he raged in anger.

We understand that anger continued at the PLP’s big meeting on Tuesday night at Gambier House. Party officers attending were updated on the edict served to Christie, which caused him to fuming over it again. The incident we understand is driving Christie in overdrive calling both Obie Wilchcombe and Sen. Jerome Fitzgerald to suspend all their campaigns for leadership inside the party. 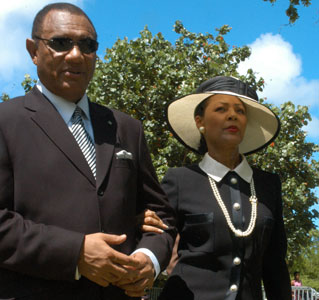 Bahamas Press has learned Christie surfaced a document, which incriminates Wilchcombe in another scandal involving the national fly carrier Bahamasair. We’ve learned that he has cautioned Wilchcombe that if he seeks his bed to run in the party elections, that document will be made public. Bahamas Press has already collected details on the scandal, however, WE ARE NEVER SURPRISED BY THE ACTIONS OF THE ‘SNITCH’!

This latest update therefore confirms ONLY Philip ‘Brave’ Davis will contend for the deputy leadership of the party. Meanwhile the dark horse, which will be endorsed by Bahamas Press, will challenge Christie!

<<< Like a couple dressed for a funeral the Christies will face the battle of their political lives to stay at the top of the PLP this October. PLPs want a  CHANGE in its entire leadership!