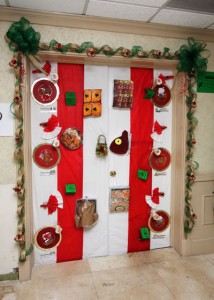 NASSAU, The Bahamas — The Cabinet Office kicked off the Yuletide season by holding its first ever Christmas Door Competition, which lasted from the end of November to Monday, December 6, 2010.

The Government Printing Department, Government Publications, the House of Assembly, the Accounts Section, Human Resources, which includes the janitorial staff, Administration, NEMA, the Registry and Documentation all participated in the competition.

Christina Brown, First Assistant Secretary, Cabinet Office explained that the Events and Fundraising Committees at the Cabinet Office came up with the idea for a competition to encourage a spirit of togetherness as well as bring out the creative talents of the staff.

“It was fun because we came in on the weekends to really put up our decorations and door designs,” Mrs Brown said.

“We felt that it would not only draw us closer together, but also bring us into the Christmas spirit and appreciate everything that is Bahamian.” 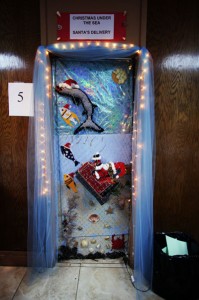 She encouraged other government ministries to promote such competitions to bring staff together and boost morale.

“You may have to pull out a couple of dollars, but the point is you could always get indigenous material to use,” Mrs Brown said.

“It also adds a bit of camaraderie; it probably improved how they felt about coming to work; they were probably excited to be at work this week.” 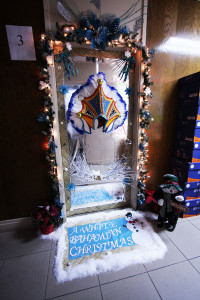 Both Ms. Middleton and fellow judge Mrs. Thompson were impressed by the creativity shown by the Cabinet Office staff members.

Mrs. Thompson said, “It was pretty impressive.  You can see the amount of the thought, time and creativity that went into everything.

“The competition obviously brought out a lot of thoughtfulness in everybody.  They had to go to another extent in terms of thinking of what is Bahamian and what is different.”

She said they are judging based on originality, creativity, lots of thoughtfulness and something that is obviously depicting Bahamian culture.

The first, second and third place winners will be announced at the office Christmas party on December 17.  Winners will most likely receive a trophy.