(14th June- Nassau Bahamas) Louis Bacon has used his vast fortune to browbeat the international media and turn his London-based Attorneys into a Gestapo force on unsuspecting civilians and the freedom of the press; but all that may come to an end in a Bahamas Magistrate’s Court later this month when Bacon has to face a private criminal prosecution bought by the international fashion designer, Peter Nygard .

The case goes before Chief Magistrate Roger Gomez on June 27th where a number of persons, including Mr. Bacon, are cited as conspirators in the summonses. They will be required to make their first pleas and return for the trial date to be set by the Chief Magistrate.

2.     Mr. Bacon, together with the General Manager of the LCPOA, Ms. Mary Braithwaite, directed certain unfavourable actions to be taken against Mr. Nygard and his property so these measures could be set in place.

3.     Mr. Pericles Maillis, a senior Attorney to the LCPOA, was extremely instrumental in directing the parameters by which the harassment took place.

4.     Mr. Bacon, through Mr. Maillis, was instrumental in hiring a former FBI agent named Jerry Forrester and directing him to conduct a series of espionage surveillances on Mr. Nygard with a view to further intimidating him and causing harm and damage.

5.     Mr. Forrester brought Mr. Bradley Pratt into the mix, a disgraced former Bahamas Police Detective.  These two men began a series of exercises in procuring women to concoct and fabricate stories of sexual assault on Mr. Nygard’s property; and/or that they had been involved in sordid sexual activities at Mr. Nygard’s behest. These women were offered huge cash advances for their complicity.

6.     Mr. Bacon entered into a deal with the Canadian Broadcasting Corporation to air a damaging untruthful expose on Mr. Nygard’s operations in The Bahamas, alleging in that broadcast that Mr. Nygard was acting unlawfully in The Bahamas therefore jeopardizing his immigration status. This is particularly significant as the former Government publically expressed its venom towards Mr. Nygard and key former Cabinet Ministers became known dinner and retreat companions with Mr. Bacon at his villa in Kamalamee Cay, Andros and at Point House, Lyford Cay.

7.     Mr. Forrester and Mr. Pratt traveled to various international destinations on this mission, one such trip was to a London office of an assumed fashion competitor of Mr. Nygard where these two men, on Bacon’s behalf, solicited help in destroying the Nygard brand name. Video taped evidence of these meetings may be introduced into evidence.

8.     The LCPOA was complicit with Mr. Bacon in disturbing the deeded right of way or easement over the Bacon property to Nygard’s in hopes that this would force Mr. Nygard into a fire sale of his property since his only access to it was being controlled by Mr. Bacon.

9.     Mr. Bacon’s conduct led to a series of on line, cyber attacks discrediting him and his brand name and which were injurious to his enterprise.

10.  The hiring of Mr. Forrester and Mr. Pratt, who has a violent past history also, put him in fear of his life and safety, as well as that of his staff and guests.

While Mr. Bacon was assumed to be in The Bahamas this week, he continued to elude Police as they staked out his properties to personally serve on him the court-issued summons. The head of Mr. Bacon’s household at Point House is said to have accepted service for him, which is to be argued constitutes good service on Mr. Bacon.

This is Mr. Nygard’s second effort at this private criminal prosecution. The first effort launched in late April was deflected by the former Attorney General Mr. John Delaney, who used his powers to enter a nolle prosequi in the matter. Mr. Delaney said his rationale was that as the substantive issues were of a civil nature, he did not think that it should be pursued criminally.

Concerned legal observers and the general public quickly lit on the fact that Mr. Delaney, an appointee of the now ousted Free National Movement Government, lives in Lyford Cay, is a member of the LCPOA and, since the defeat of the FNM in the May 2012 General Elections, has opened his private law practice just a stone’s throw away from Lyford Cay where he is believed to have a number of Lyford Cay Club members as his clients, who are also associates of Mr. Bacon.

Mr. Bacon, who is said to have bank-rolled the FNM’s losing general election campaign to the tune of millions of dollars, made no secret about his close association with the former FNM Government and his chummy relationship with former FNM Environment Minister Earl Deveaux, who may reportedly also be could end up as a  joint defendant in the private criminal prosecution.

With the FNM out of office and that part of his protective cover blown, Mr. Bacon faces an uphill battle against his known persuasion to remain reclusive.

Bacon’s London-based law-firm, known for its brute force on the media, has been doubling up on its letters of threat and intimidation about the media in The Bahamas reporting on the private prosecution and many believe that various arms of the international press has also been silenced.

At the Magistrates’ Court level, the evidence will be put by Mr. Nygard.  The defendants will then have their opportunity to present their defence.  Then, after summations from both sides, the presiding Magistrate will be the sole judge as to the veracity of the evidence in relation to the accusations made.

Said a leading Bahamian criminal trial attorney, “the pursuit of private criminal cases are still a novelty in The Bahamas, but they are an ancient part of the common law and statute.  Mr. Bacon will discover that The Bahamas as a Commonwealth country is not a place where you want to scoff at the rule of law and a summons of the court.”

It is expected that various issues raised in the trial will be heard before the higher courts and even as far as the Privy Council before this matter is finally adjudicated at the Magistrates’ Court level. 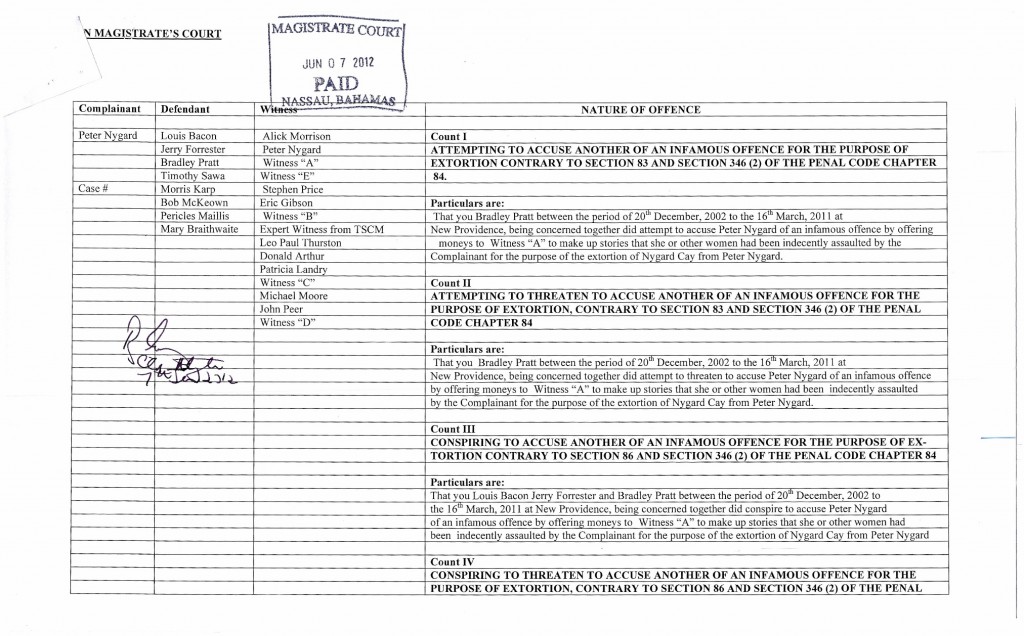 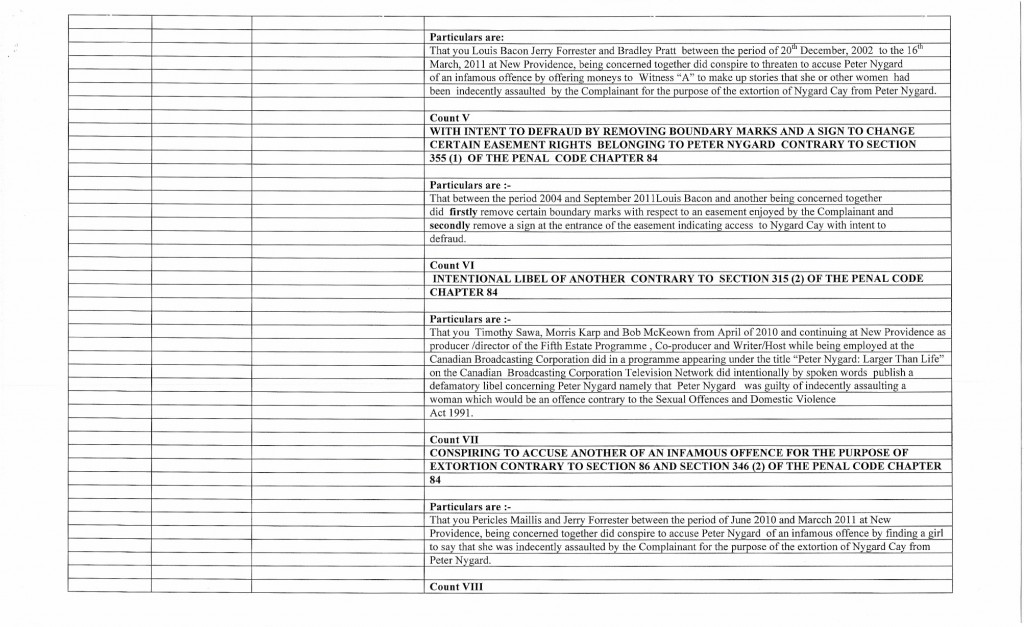 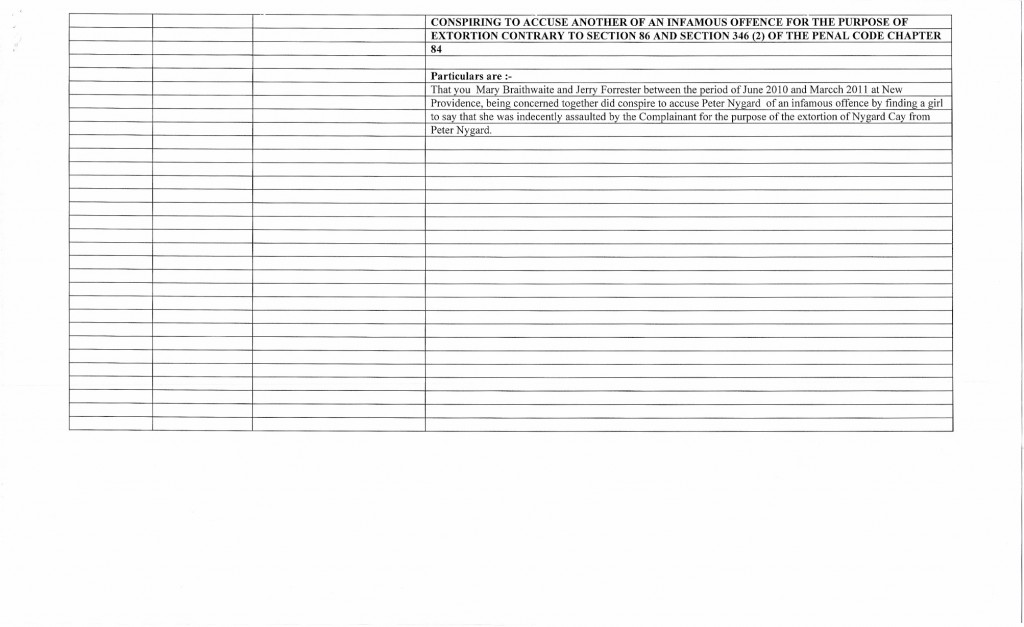 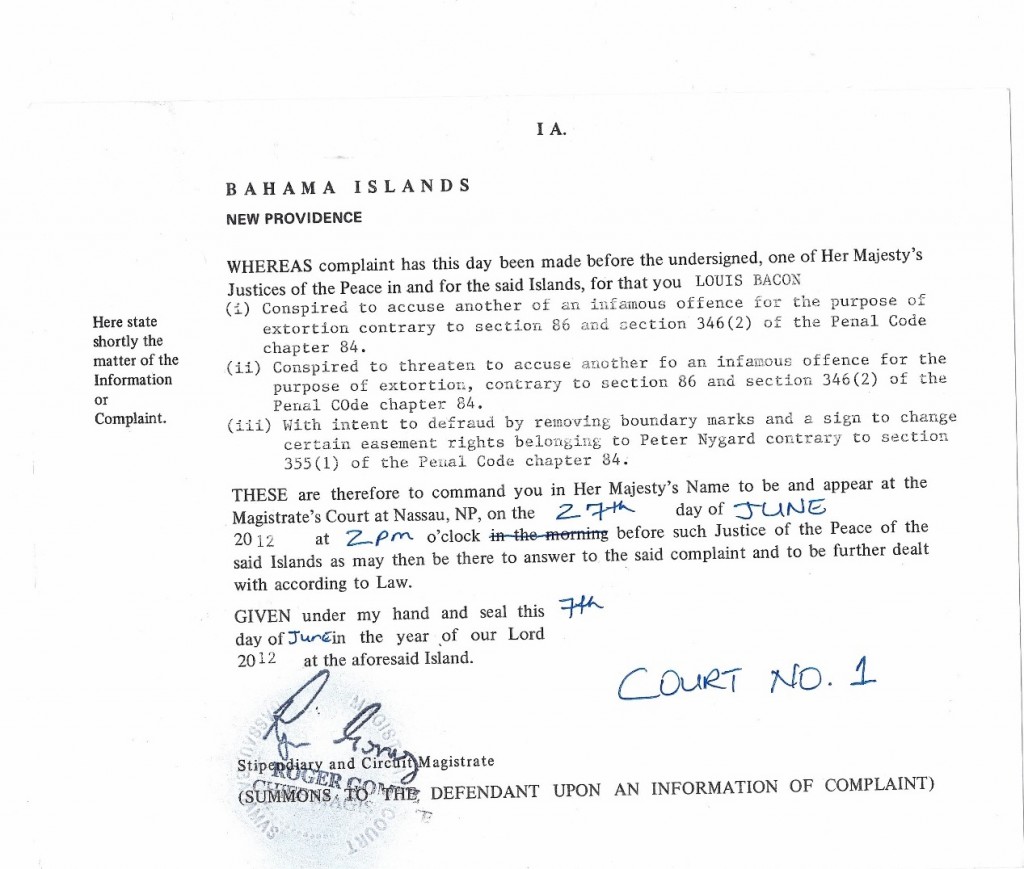