Look what the media has come to! When will they return to a time of educating and informing society! 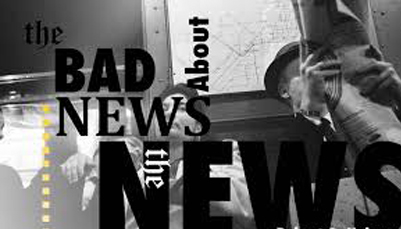 A couple weeks ago a certain … ahem … hairy faced anchor gentleman was sent blushing and in hiding when his photographs and videos turned up on the world wide net. These were no regular pictures, people. They were pictures and videos of the hairy faced anchor with his “particular type” juicing in our beautiful ocean. Using no condoms and behaving badly on the shoreline. Pure Darkness! Thank God the salt purifies it or else we would catch some “bungy” germs.

The hair faced anchor ran off into hiding and was warned by one of the “particular type” gentlemen who told him if he went to the police, more photos and videos with him talking love talk on camera would be exposed. There was a photograph of about 10 well known “particular type” gentlemen in a pose that made even BP blush. The group photo looked like they had a reunion before they did the most UNGODLY, UNNATURAL AND DANGEROUSLY DEADLY UNHOLY ACTS! Look what mama good child has come to!

What BP wants to know is WHO rush da closet door? Some of those “particular type” Palmolive hand men displaying their “affection” in that picture are choir directors! BP wants to know where is the Christian Council on this?! Or they still fussing and saying “NO” to buying numbers which is now legal by the way.

So if that was not enough, a few weeks later, someone else decided to resurrect an already published “passage” on the sluttish behavior of a chief journalist and oh how the condemned rose to her defense. Out of every crook and cranny crawled all these old croaking voices saying they STAND for this one and that one. WHAT IN DA HELL IS DIS??!! Some who came out in her defense are just as terrible as the gals [AKA “bungy” germs niggas] posing and having sluttish darkness on the damn beach!

So the chief journalist had the nation behind her while she wrote about what happened with the country’s weather radar system damning a certain news director (and his team) who we will refer to as Oscar the Grouch. So Oscar is known to make things look pretty but not much else so naturally he got ten pieces of offended and licked off shots while the chief journalist got flat, but not for her normal purposes. This chief journalist walks around half naked and feeling superior but ask her how she get dem stories and she will go to the army’s “Don’t Ask, Don’t Tell” mode. We don’t believe for a minute she writes any of them but that another story for another day!

Well what Oscar gone and lick off shots for he get?? Well country!! Media gone mad!! BP say WHAT IN DA HELL IS DIS??

Come Friday afternoon the airwaves were blazing with verbal acid and hot piss coming from a fading talk show hack, who had no topic to discuss, so the Media Mess was suitable for her. While chomping down on two cheeseburgers and three extra large fries, she stooped down in her studio and got as low as she could, talking the worse she could dredge up about Oscar, his wife, his baby daughters and EVEN HIS DEAD SON. What manner of woman can speak ill of CHILDREN and a DEAD CHILD? But das what playing with Obeah – RAW ON DA PORCH does do to ya!

She is so mad at the world she didn’t even realize the battle was not hers but Oscar’s and the Chief Journalist’s. WELL GREAT GRANNY FROM THE SKY!!

My, my, my, how the mad jump in at ANY occasion to spit venom into the air. To the fading, talk show HACK, BP says mind your own damn business! We know you don’t like nobody [even ya damn self at times];and we know you probably don’t even like the Chief Journalist ….but jumped in so you can cuss, throw up your gown tail [so we can see a G-STRING] over your head and carry on to be noticed. Look what eating beef does do to some people!

BP cannot wait until Monday morning to see how the tables will turn cause some news just blow our way in the wind. This Media Mess did not go down with the sunset. Heads are going to roll and someone is going to need a new pair of pants or panties! We not talking it!!!!