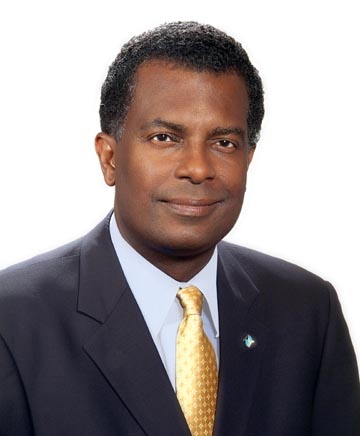 Speaking on a wide range of issues, Mr. Mitchell advised that the role of the legal professional is not limited to their practice but should spread out to include matters in the public interest.

There is so much to say this morning and always so little time to say it but I shall do my best. I start by thanking you for inviting me to share my thoughts with you this morning. I consider it a special honour.

This discussion this morning is fortuitous for a number of reasons. On the evening that I received the invitation from my friend Keith Seymour, I had just been in a discussion with three young lawyers who were discussing their careers. One had just attended a meeting of a group of lawyers trying to start a division of the Bar Association for lawyers who practice criminal law. Another was just about to change law firms and was headed to a more lucrative practice in one of the big firms. Another is self-employed in his own firm and from all accounts is doing well. He was regaling us with stories of the eccentricities of some more senior colleagues in their relations with magistrates.

I too am self employed, having lost office last year and having to restart my practice from scratch, with a profession that has grown in numbers since I last practiced in 2002, and with lots of new faces, practices and people that I do not know, and dare I say it hardly understand but need to understand.

Mine was a typical old man’s lament in a way: the young lawyers today do not seem to be interested in their profession outside the very narrow confines of their practice itself. I lamented the fact that having left the practice for five years, there seemed to be no general advocate for the cause of the impecunious litigant, for the general public interest issues and for the improvement of the administration of justice. I must say that major exceptions to this have been men like Wayne Munroe who is the President of the Bar and of course my friend Maurice Glinton in Freeport and Lester Mortimer in Nassau. They continue to battle. I am sure there are others but the names I do not know.

My real point was to inspire younger lawyers to accept and understand the rare privilege which they have in this small community to do good just by the words they speak. In so many ways in our societies through the region when lawyers speak it makes a difference. You have only to look at the Heads of Government, the legislators; you will see the preponderance of lawyers in these callings. So lawyers in training are following a well worn path to social and civic leadership and to public service. It is a time honored statement that to whom much is given much is expected.

Up until January 2002 for 12 years, I went each year before the Supreme Court Building. There used to be a big tree there and before the Chief Justice pronounced on the legal year, I would give reviews of the Judiciary. It was a summary of what went right and what I saw as being wrong in the Courts over that year. It attracted considerable press attention, and I think it was a valuable tool for the public to appreciate the role of the judiciary and how it could be improved.

You who know something about science will know that there is to every act an equal and opposite reaction. The Forces were not neutral to this kind of public advocacy. In fact, the irony was that the Bahamian judges who were the victims of the discrimination in their own country at the time by the then political directorate seemed more upset with the criticisms and advocacy than with the discrimination. They seemed to despise the messenger, even though there is no question that the advocacy along with that of others assisted in making sure that they got the jobs of Judge, Chief justice and President of the Court of Appeal, as they should have.

I think that my lament today is justified. I am concerned that again there is the preponderance of the view coming from the Bench that the Judiciary is above public scrutiny and public criticism. I raised this in a recent statement in my party’s convention. I reject any such notion that the Courts are beyond public scrutiny and criticism. Nothing could be further from the truth. I am concerned about reports in the press where the Judiciary appears to see itself as sacrosanct and that there is the suggestion that the coercive power of the courts should be exercised in a way that could adversely affect the right to speak freely. I think lawyers have to disabuse the public and the judges for that matter of any such notion.

There is an abundance of case law about the exercise of the coercive power of the Courts to punish citizens for what they say about the courts. Members of Parliament and Senators, local government elected officials are immune once they make their statements in the course of their proceedings. But I would suggest that the average citizen has the same right to speak freely, provided it does not allege something which would clearly be defamatory like bias or prejudice. Civility also demands that one seeks not to impugn the Judge personally but even that may sometimes be called for in public debate. The starting point is the Denning phrase “Justice is not a cloistered virtue”. The case law shows that the Courts can be and are subject in a democracy to public scrutiny.

The fact is decisions of the courts should be subject to public scrutiny and criticism.

You will know recently that the Privy Council has moved some way akin to the position of Sullivan and the New York Times in the United States that public figures have less protection in libel actions than do ordinary citizens. I think that is a good thing. Similarly, it now appears that statements made in Parliament may be used for certain evidential purposes notwithstanding the general prohibition on the actionable use of those statements. So it is clear that public norms are evolving. Young lawyers, and new lawyers, particularly those who have come from another life have the responsibility to push the envelope in the public interest.

There is the responsibility to public education. The journalists, the people who write the blogs all need to know what the law is and the nature of our democracy. By engaging in the process of public advocacy, you will improve the general public good but more importantly share the nature of our democracy in an image which is acceptable to you. You become an active participant in shaping our country and its norms. Indeed the Code Of Conduct for attorneys, Rule XII says, “The attorney should encourage public respect for and strive to improve the administration of justice.”

I started out from the time I left high school with one aim in mind, nascent then, but concretized by the time I became the Director of News and Public Affairs at ZNS in 1978, to further the creation of a liberal democracy, a pluralistic society with an abiding and abundant respect for the rule of law, the rights of the individual and the public interest. I have never deviated from that creed. I suggest that this is still the best way for The Bahamas.

There is a price to pay of course. Your income will not be what many others make. But you will find that others will support the advocacy because they can’t do it themselves. I was once reported to the Bar Council by an overzealous and oversensitive judge whom I did not think should be a judge in this jurisdiction and I said so publicly and why. One of my comments led to a disciplinary action which could have led to my disbarment. I was flabbergasted. Fortunately, I had a good lawyer and the matter was defused.

In taking on public interest cases, however, where you are the lawyer of last resort, using the courts and the public advocacy can also be financially rewarding in addition to the fulfillment of shaping public policy.

The issues are still there. One vexing issue is the fact that it continues to take up to 18 months for a routine probate to be settled in our courts. This is a scandal and the whole system seems unmoved to do anything about it. It may mean that the legislature has to intervene.

I still think that criminal libel should be struck from the books, that the contempt of court jurisdiction in the common law should be abolished and the contempt jurisdiction put on an entirely statutory basis. I believe that there was some abuse in the past in the use of this jurisdiction. I believe that the libel laws ought to be put on statutory basis and that a right to privacy law similar to that in France ought to be put on the books here, with civil penalties for its breach. I think there ought to be a discussion on whether the laws of libel should permit defamation of the dead to be an actionable libel.

Just last evening I read an interesting case by Mr. Justice Neville Adderley on the question of dower and whether it is in fact abolished. The ruling seems to suggest that it is for all persons who did not have an actual dower at the time that the law came into Force and so the question of renunciations and commissions should not arise in the future with regard to those. The question though appears to be what of those where dowers were not renounced before the commencement of the act, and the dower actually vested, with the Court having ruled that the relevant legislation is repealed, how does one get clear title. Perhaps the policy court will have to settle the matter.

Lawyers should also be advocating a public defenders office with greater vigour so that all who come before the courts can get a competent defence by a legal practitioner.

In my own party the PLP, I have taken the view that in future all appointments of Judges where the law requires consultation between the Prime Minister and the Leader of the Opposition that we ought to insist that the Bar Association be consulted as well before there is agreement on that Judge’s appointment.

I believe that Parliament should act to prescribe rules on challenging the decisions of the Constituencies Commission on the delimitation of boundaries as well as challenges to the Senate appointments. I am concerned that the challenge to the Senate appointments currently before the Courts is delayed far too long for hearing and should have the same priority in hearing as an election court case. It should leapfrog before any other matters.

It is not an exhaustive list of public advocacy issues. It is my list. My role here today is suggest to you that there is a role for the public law advocate, and that in some sense each lawyer should devote a part of his practice to that effort. I will continue to devote my own life to that and I hope that you will consider carefully what I have said here this morning.

Thank you very much for inviting me.
— end —