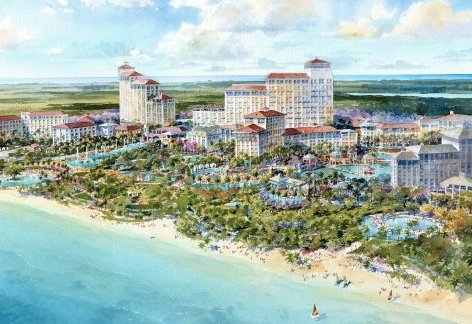 Nassau, Bahamas – The National Development Party (NDP) calls on the Free National Movement Government, which  touts itself as being a party of accountability and transparency,  to immediately table the entire Baha Mar deal, in the House of Assembly. If the Bahamian nation and body politic is to swallow and absorb this “vitam in” pill,  we really should  have the ingredients label visible to ensure ourselves that the old adage ‘the devil is in the details’ is not true in this instance.  We are sure, The Prime Minister has no objects to our request having  said, on the floor of the House, that he Seeks to, “Ensure that the Bahamian people are FULLY informed of the REQUIREMENTS, CONSEQUENCES and BENEFITS  which are PROJECTED to result for the Bahamas if the development proceeds as is now proposed by the principals.” (emphases Mine).

In lieu of the Prime Ministers’ statement,  We are  sure he is extremely comfortable with  all Bahamians  dissecting  every aspect of this deal to ensure themselves  as to whether this mega resort project is in the best interest of Bahamians now and those yet unborn.

For The National Development Party,  that which has already been released is cause for concern and we object to the demand of the Chinese that 265 acres of prime land be transferred in fee simply  before any construction begins. fee simple is the estate in land that a person has when the lands are given to him and his heirs absolutely, without any end or limit put to his estate. Land held insimple can be conveyed to whomsoever its owner pleases forever; it can be mortgaged or put up as security as well. Again we are concern about  the land give away in question and it seems as if  The Prime Ministers is concerned as well having stated, fee

“I also believe that the government of the Bahamas has an obligation to explain to the Bahamian people other requirements of  the Bahamas unrelated to the labor issue which arise from this project. Principally this will involved the transfer of Government-owned and Crown lands  to the developers.  Because of the conditions precedents set by Baha Mar’s financiers-China Import Export Bank  and the China Construction Company- these lands are required to be transferred, in Fee simple, in advance of  the start of construction of the project.”

This demand is interesting since the Chinese would never accept or even accede  to such a demand, as one is only allowed to lease land in China. Land ownership in China is divided into two categories: state-owned land (or state) and collectively owned land (or collective state owned land). There are specific provisions on land ownership in several key Chinese laws and regulations (Readers can find the specific provisions on land ownership in Article 10 of the Constitution of the People’s Republic of China (the PRC) (“Constitution”) (“PRC”), Article 47, 48, 58, 59, 60 of the Property Law of the PRC (“Property Law”), Article 8 of the Land Administration Law of the PRC (“Land Administration Law”) and Article 2, 4 of the Implementing Regulation of the Land Administration Law of the PRC (“Implementing Regulation of Land Administration Law”).  Will any of the 265 acres given in Fee simple, that is not used for residential purpose, going to eventually fall in either of those two categories?  land

This demand is reminiscent of the Biblical story of  two brothers, Jacob and Esau,  where Jacob desiring Esau’s birthright, having caught Esau in a state of severe hunger demanded  from Esau a transfer of the birthright before he would give Esau the bowl of Red Stew dangling in front of his eyes. “…When Jacob had cooked stew, Esau came in from the field and he was famished; and Esau said to Jacob, ‘Please let me have a swallow of that red stuff there, for I am famished.’ Therefore his name was called Edom. But Jacob said, ‘First sell me your birthright.’ Esau said, ‘Behold, I am about to die; so of what use then is the birthright to me?’ And Jacob said, ‘First swear to me”; so he swore to him, and sold his birthright to Jacob. Then Jacob gave Esau bread and lentil stew; and he ate and drank, and rose and went on his way. Thus Esau despised his birthright.” (Genesis 25:29-34).  Centuries later, Esau’s descendents (The Edomities) become a footnote in the history books, while  Jacob’s (whose name was changed to Israel) descendants, the Jews,  remain, having left the most indelible and profound impact on the history of Man.

The message from the Biblical motif  is that one should never be so desperately hungry, in this instants for jobs, that you lose the historical perspective on the now.  Our Constitution’s  preamble states, “We(are) the Inheritors of and Successors to this Family of Islands”,   The Government must insists that Baha Mar that it will only allow a peppercorn lease for 99 years for the land in question, a dollar for every acre doled out (265 dollars) or a penny for every parcel.  If they cannot accept this enormously generous offer with this lease concept the Chinese understand and champion, then we should question their long term ownership intentions on Land that will not be sold for private residents. It is to be noted that the former owner of the Wyndham Crystal Palace resort and Casino (Mr. Ruffin) existed on the property on a lease condition and Baha Mar should be made to do the same.

Second the Government should always adhere to the Law, in this instant, The Hotel Encouragement Act of 1954, and not allow the granting of some 8150 work permits for Chinese works on this project, since the Act    only allows for a maximum of 25 % foreign worker complement on projects of this nature and that number of Chinese amounts to 71%.  The necessity, we are told  for such a large number of expatriate works is that the country is not possessing of the necessary skill sets to complete this project. The NDP say, “rubbish”! The Bahamas posses all of the Skill set necessary for this project. We have the structural engineers and contractor who know how to designed and building the components of Baha Mar. Who can mount a backhoe and cut a trench, place steel re-bar in the trench as require by the blueprints, pour concrete in that trench and create a foundation and weld steel truss and joist as required for the structural frame.

We have Mechanical and Electrical Engineers capable of designing and installing any and every building system on the planet. We have Masters and journeyman plumbers, three phase and single phase Electricians, Air-conditioning contractors and fire protection contractors and experts, all of whom can  glue or crimp plumbing  pipes, install every kind of pumps, all kinds of fire protection systems, every kind of Air conditioning system and install every kind of Electrical system. Indeed who will the government have review Baha Mar’s construction drawings for Bahamian building Code violations and design flaws if not  the Bahamian engineers at the Ministry of Works? And who will the  Government have on-site to inspect and  ensure that the design on the Blueprint and the Building Code is adhered to if not mainly Bahamian Engineers and Construction inspectors? If you do not possess the skill sets necessary how can you oversee the installation?

The Government of The Bahamas and indeed the Bahamian Contractors Association(The BCA) knows better than to allow such an emasculating message to be sent into our society to our impressionable young men and women.  What should have happened before  and indeed now,  is that all the trades in the Bahamas should be licensed under a contractor’s bill passed in the House of Assembly forthwith so a list of all the Bahamians possessing the necessary skills in the construction field are duly note and listed for this and all future projects.

The NDP,  again ask The Government what will happened to the nearly 2000 hotel workers currently employed by Baha Mar once the construction begins. If the majority will be let go then the employment of 3300 Bahamian construction works amounts only to a 1300 job gain during the course of this two year construction project which will have very little impact on unemployment numbers in the country over that duration.  Further what will be the effect on land prices in New Providence in the Western district in particular, which is entering  the realm of  being beyond the reach of most of the populace?  What Will be the effect on the  movement of labor, of families in the country, from Grand Bahama and other islands into New Providence in the hopes of securing jobs at Albany, South Ocean and Baha Mar since The Ginn and The I-group projects have taken financial hits and setbacks.

Further, The Prime Minister stated that Bahamians will Construct, “ …a new West Bay Street/ Corridor including utilities with a value of $75 million.”  Is all of this cost passed on to Baha Mar or will the Bahamian taxpayers be responsible, it is unclear from the statement?  Who will pay for the necessary Electrical, Telecommunication, water and sewerage upgrades and re-routing or lines for this project? Who will pay for the new roads necessary for this project?  Are there any future electrical usage concessions given to Baha Mar that will be passed on to the Bahamian taxpayers?  There are many more questions that can be asked and we, in The NDP, again call on the Government to immediately release the entire Baha Mar deal so we all may have them answered.

This deal, given what we know, must be re-negotiated. Hence, The National Development Party cannot support this deal as it is currently structured and again call on the FNM government to re-negotiated this deal to ensure that the maximum benefits of this project accrue to Bahamians and their progeny.

It Is Possible and It Will Happen!