ANDROS, Bahamas – Minister of Education, The Honourable T. Desmond Bannister wrapped a two-day visit to North and Central Andros today with a meeting of parents and community leaders at the North Andros High School. During his visit to the island, Minister Bannister initially toured all schools in the district and met with students, teachers and administrators to access the educational landscape and address concerns of the respective groups.

The Minister went into classrooms and participated in ongoing lessons as well as engaged the students in general knowledge quizzes on The Bahamas.  He also left the students with words of encouragement and told them to take advantage of the opportunity that they have to acquire an education. He also shared with them his pride in being a native of Andros and the legacy of many other Androsians who have contributed to national building namely the late Clarence A. Bain, Dame Marguerite Pindling, and his parliamentary colleague, The Honourable Vincent Peet, Member of Parliament for the North Andros and Berry Islands constituency.  Mr. Peet accompanied Minister Bannister on the tour and joined him in uplifting students and educators at each stop.

Last evening, the Minister addressed concerns by the parents whose children attend schools in Central Andros.  He appealed for their assistance in promoting the importance of education to their children and not leaving this responsibility solely to teachers.   Additionally, he called for them support his ban of cell phones on schools campuses for the protection of teachers and students.

Parents also expressed their concerns relative to education in Andros.   They raised issues such as the need to complete the track at Central Andros High School; constructing bathrooms for teachers at the Fresh Creek Primary School;   assigning more teachers for specialized courses at the high school level, and the need for a Special Education teacher in the Andros District. 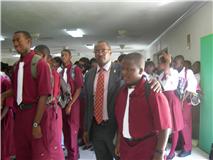 Minister Bannister was candid in his responses to the parents stating that educational priorities and a limited capital works budget prohibited the track from being completed at this time.  He indicated that he had an obligation to ensure that the children in Spanish Wells and Inagua received the much needed classrooms that they urgently required.  He also told them that as soon as the funds became available the track would be surfaced but the reality is that it cannot be dealt with at this time.

On the matter of specialized teachers and a special needs teacher, he pointed out that unfortunately those types of teachers are not available.   Minister Bannister revealed that many Bahamians entering the College of The Bahamas to pursue a degree in education are doing general studies or subjects that over-subscribed. This has resulted in the Government going abroad to recruit teachers to teach Mathematics, Sciences and work with special needs children.

“This has caused the Ministry of Education to henceforth issue teaching scholarships to persons whose goals are aligned with the national goals,” the Minister stated. 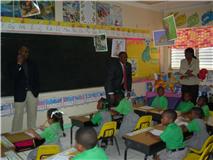 Minister Bannister further stated that this decision has not been favourably accepted by students and their parents who have interest in law and medicine degrees, but the Government has to take this stance to ensure that the country has teachers in the future to educate the Bahamian population.

The parents expressed their ‘buy-in’ of the Ministry of Education’s theme for the 2010/2011 school year: “Parents, Students, Schools: A Winning Combination for Excellence in Education.”

On the day two of the Minister’s visited schools in North Andros, once again rallying teachers and students and observing the lesson offerings at the institutions.   During his stop at the Red Bays Cay School he held an impromptu meeting with parents of the remote school who showed up to air their concerns.  He addressed the matter of an expatriate teacher whose contact was renewed by the Ministry of Education when it was feasible to replace the individual with a Bahamian.

He also addressed the issues of security and maintenance of the school campuses and gave the parents an honest picture the educational budget.   The parents seemed pleased with the fact that the Minister listened and was frank with them during the discussion even though they did not achieve the outcomes they may have expected.

The final stop of the Minister’s tour was the North Andros High School where students waited pass the 3:00 pm dismal of school to hear the Minister praised them for their success in the recent BJC and BGCSE examinations.   Several of the students sat their exams in the 11th grade and attained five or more with C and above grades.  Minister Bannister told the students that they ranked third in the nation in the BGCSE exams and that he expected to improve of these results next year.