Papa tells supporters he doesn’t want the job of Prime Minister anymore! Did the BEC Bribe Taker developments cause him to change his mind? 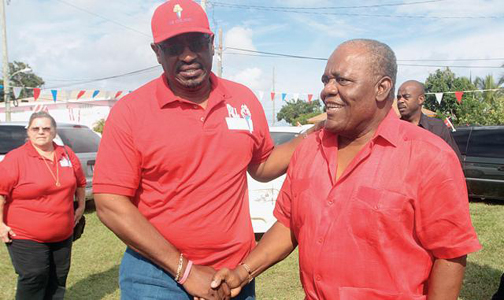 Ingraham could take up the role as Campaign Coordinator and maybe appointed Governor General if the FNM becomes Government!

Nassau, Bahamas — The pastures for Dr. Hubert Minnis appear to have gotten greener as a major endorsement for his leadership could now come from the former Prime Minister!

Sources deep in the party spoke about a meeting where Papa warned supporters that the hour is too late for him to come back and urged loyalists to rally behind the present leader of the FNM as the country heads into a general election.

Registration for an election is presently underway and the Christie Government could any day now call a snap election.

According to polling data taken by BBB Analytics, an election with Ingraham at the helm would deliver a sure and certain defeat for the FNM! With record unemployment and massive huge deficits left while papa ruled, the electorate appears still uneasy about an Ingraham-led government.

“This is like the Bush name now running for the White House. Everyone remembers the hard times and the poor fiscal management under the previous Bush/Ingraham administrations. It would be difficult for Ingraham to emerge on the top,” one of the statisticians gathering the information said.

What is even clearer is the fact that the PLP is not as fractured as the FNM, in spite of a few weeks of rumbling over the possibility of the Deputy Leader of the PLP challenging the Leader. That matter appears to have been put to rest with the postponement of the ruling Party’s National Convention.

“We need unity now and perhaps Mr. Ingraham can help mend the broken relationships inside the FNM to help Dr. Minnis galvanize a force against the PLP!” A source close to the Ingraham camp said.

Dr. Minnis last week told the press that he can’t please everyone and therefore it is a lonely place at the top!

What is clear in all this, though, is this… Ingraham ain’t coming back and the PLP appears to already be on the ground in the affected Hurricane Joaquin ravaged islands. IT AIN’T LONG NAH!