Andre Rollins and Loretta Butler-Turner were slapped and FIRED by their Parties in 2014! 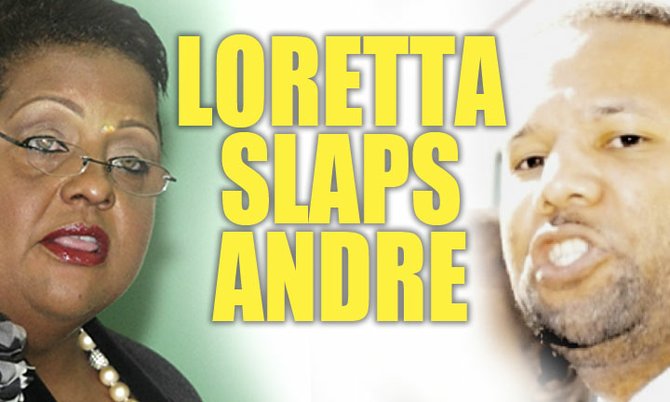 2014 was a bad year for these two politicians!

Nassau, Bahamas — Two politicians who dominated the media in June of 2013 over a slapping incident – Loretta Butler-Turner and Andre Rollins – had to make BP’s 2014 stories of the year list.

Both politicians became victims of their parties in what has been a fallout and collapse in their popularity.

First up was Andre Rollins who incensed PLPs as he attacked Prime Minister Rt. Hon. Perry Christie and the Stalwarts of the Progressive Liberal Party in the Parliament. He was called to apologize for his incendiary remarks on the floor of the House and he refused, telling the Parliament, “I will not apologize”. The MP for Fort Charlotte, who came though the backdoor of the Party, stood on his feet in the House and made a public spectacle of himself as he celebrated Hubert Ingraham and cussed-out the leadership and officers of the PLP.

Just over the holiday dinner, the character of Rollins was still being decimated and torn to shreds just like the Christmas turkey by party officers who brought up the House incident as BP was sipping on cream sherry.

They said, “Rollins is a JACKASS to come out and attack the people who have the power to grant him a nomination at the next general election. He ain’t no PLP! And the Party should just kick him to no man’s land just as the FNM did ‘Big Sexy’.” Some PLPs, we an tell you, are deeply hurt over the assaults on the Party – including this BP writer. Our prediction: Fort Charlotte will no longer be a seat come  the next General Elections.

But the Loretta incident was even worse. This year, supported by everyone in the WUTLESS MEDIA, the granddaughter of Sir Milo Butler stood up to challenge the now undisputed leader of the opposition Dr. Hubert Minnis. The nastiness of that episode became unforgivable for  FNMs.

And we believe it went all downhill for BIG SEXY, when she decided  she wanted to create confrontation for Dr. Minnis as he joined party supporters at an event in Abaco – get this – planned by TEAM LGBT!

The group tried to stop the FNM Doctor at the door – and boy what  followed was what we can only describe as “BLACK NEEDLE”!

There was blood on the floor inside the FNM as Minnis called a snap  convention much to the displeasure of team LGBT! BP had a front-row seat along with Christie and Davis as we watched FNMs drop licks and  blows on the FNM Deputy Leader.

Who would believe the massacre of that event? Women were ‘cussin’ Big Sexy at the door! One telling Loretta something we at Bahamas Press –  as nasty as our mouth is – we cannot repeat – and by the end of that  event the FNM had given their short-lived Deputy Leader the slap of a  lifetime. This was not good.

In the end…The PLP slapped Rollins and the FNM bitch slapped Loretta.

All we at BP say is this – das what churrin does get when they can’t  behave when standing in the public view.