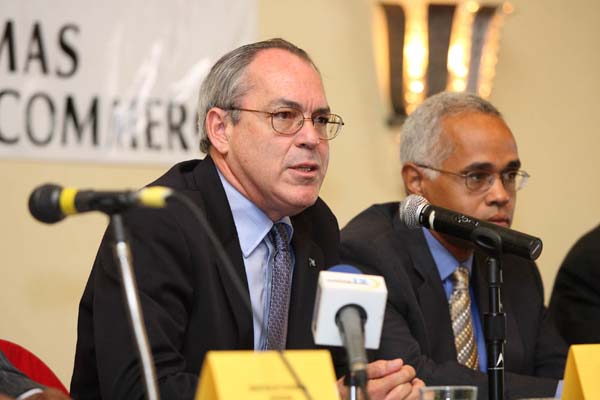 â€œMany qualified Bahamian Infrastructural and Marine Contractors who have submitted bids and proposals to the Albany Developers have been left dumb founded by the arrival of DEVCON Ltd, at the Albany site in South west New Providence. DEVCON began offloading its massive fleet of brand new equipment and trailers at the Clifton terminal on Tuesday July 1st. DEVCONâ€™s ability to use the many import concessions, granted to Albany to import duty free equipment â€“ will allow DEVCON to overshadow and outshine local contractors who are unable to change their aging equipment fleets because of the duty issues in tough economic times.

â€œIn 2007 Albany conducted numerous Job Fairs and other contractor recruitment exercises in which innumerous local contractors were asked in late November of 2007 to submit bids for the upcoming work by January 18th 2008. To date, local contractors have heard nothing from this corrupted bidding process, where Albany executives were known to have been soliciting bribes.

â€œDEVCON is attempting to disguise its real presence here- under the pretense of a joint venture with Mosko Construction and Bahamas Marine. Where there is Mosko â€“ there is Brent Symonette. What is Brentâ€™s involvement in all of this and how is he linked to up-coming Civil and major Marine projects? No â€“ good, can come out of DEVCON being here, in light of our present economic maladies and they should not be granted the 70 plus work permits â€“ that they are preparing to ask the Government to give them. Building and Marine Construction work in The Bahamas must be safeguarded exclusively for Bahamians â€“less we face the irony of not being able to feed and clothe ourselves. DEVCON has no monetary ties to The Bahamas and it has no local business license to operate and 95 cents out of every dollar it makes â€“ will be repatriated out of The Bahamas.

Bahamian Contactors should be made aware that DEVCON is a Full Utility and Marine Contractor â€“ capable of doing the entire infrastructural, marine and development works at Albany without the assistance of any local contractors â€“ leaving little or nothing but crumbs for Bahamian contractors to fight over.â€

Bahamas Press wants to know if this is one of the main reasons that Minister Brent Symonette was given the post of Immigration in the recent Cabinet shuffle, to facilitate the wholesale giving of Work Permits to Devcon and others of foreign heritage to do work that Bahamians can do? Whatever the scenario, Bahamas Press is once again convinced that the Bahamian contractor has been stabbed in the back by â€œThe Trust Agenda.â€