Via a press statement dated February 24th, URCA’s board found its tongue and refuted allegations of conflicts of interest at the Authority. URCA has however failed to explain that it was Mr. Usman Saadat who told the people of St. Lucia the following:

It is worthy of significant note that URCA in its press release contradicts Mr. Saadat’s own statement and said that he went to Australia when Saadat said that he was leaving to settle in the far east. Clearly someone isn’t telling the truth as the Far East is far away from Australia. Was Mr. Saadat merely taking his family on a vacation in Australia as a scan of the Australian media produces no results on Saadat ever being employed there during the short period of his departure from C&W St. Lucia?

The PLP wishes to pose the following questions:

• Was the privatization committee of BTC responsible for the creation of URCA?

• Was BTC’s Chairman Julian Francis involved in the selection of Usman Saadat?

• Did Julian Francis or any other member of BTC’s privatization committee meet with Mr. Saadat before his employment at URCA?

• Which member of the BTC’s privatization committee met with Cable and Wireless to discuss the selection of Mr. Saadat to head URCA?

• Which Minister of the Government has the responsibility for URCA as four Ministers, according to this morning’s Nassau Guardian have pointed to each other as the head and when asked; all denied responsibility?

Until the foregoing questions are honestly answered by the FNM Government, the board of URCA and also Mr. Saadat, the claim made by URCA that “there was no actual or perceived conflict arising out of the recruitment of Mr Saadat or the engagement of LCI in 2009” we strongly reject the boards assertion.

“There is no nexus between former C&W employees now at URCA either in management or advisory capacities,
and the ability of URCA to objectively discharge its duties as the competition regulator that must review
and make a decision on the change in the control of BTC to CWC. URCA’s internal regulatory and
governance processes necessitate that case work is carried out by a multi-disciplinary team including
qualified legal counsel, and recommendations and decisions are reviewed by the Board. It is impossible
for one Executive to make such a decision in isolation, without consultation with the team, or with a bias
towards a former employer. Any suggestion or conclusion to the contrary is baseless, and entirely
without merit.

It is worth noting that Mr Saadat left Cable & Wireless in July 2008 at which time he relocated, together
with his family, to Australia. Mr Saadat’s move to The Bahamas nine months later was the result of
global search done on behalf of the Government of The Bahamas to recruit for the new role of Director
of Policy and Regulation at URCA. Public announcements by The Government have disclosed that C&W
did not participate in the Government’s initial search for a strategic partner in the privatisation of BTC,
and was therefore not under consideration as a possible purchaser of BTC until 2010. From URCA’s
perspective, there was no actual or perceived conflict arising out of the recruitment of Mr Saadat or the
engagement of LCI in 2009. – Wayne Aranha – Chairperson” 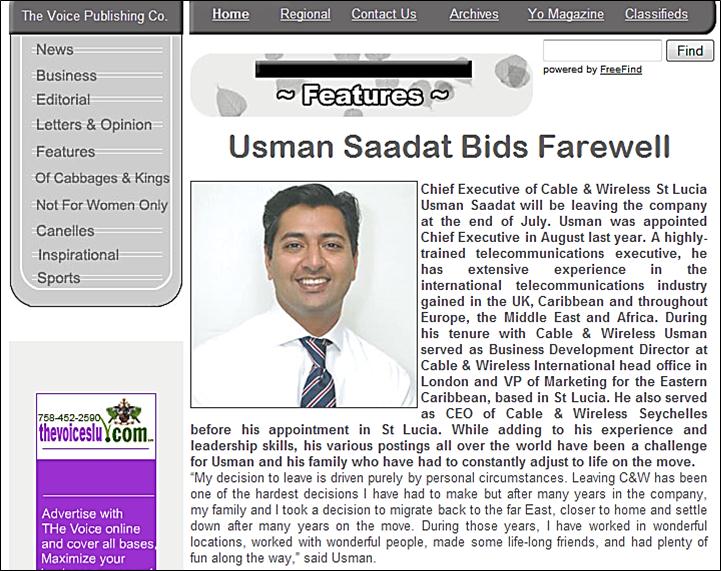