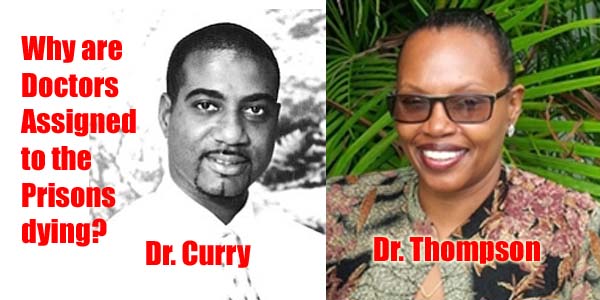 What is happening at the Prison Service? Why so many mysterious deaths?

Nassau, Bahamas – Bahamas Press is calling on the powers that be to look deeply into what we can only describe as “strange and unprecedented incidents involving deaths” at the Department of Correctional Services, which, to date, has seen the death of two senior physicians and scores of prison officers at the facility.

Less than two weeks ago, a second prison medical team member has mysteriously died while servicing the medical needs of inmates, and still there are no answers forthcoming as to what is happening up in FOX HELL!

In late October last year, Dr. Dario Alario Curry, who was just 47 at the time of his death, collapsed and died of what was then described as a massive heart attack. He was in the prime of his life, extremely involved in many programs. The incident shocked medical professionals and left prison officials in surprise. The prison, also around that same time of Dr. Curry’s passing, lost a number of prison officers to mysterious illnesses, as well as some inmates. Added to this, we can report that presently there are several prison officers on sick leave.

The former Doctor and Prince Hall lodge member [Dr. Curry] showed no sign of health problems prior to his passing – so what really happened?

And if Dr. Curry’s passing was not shocking enough, the fact that his replacement, Dr. Christina Thompson also passed away just some two weeks ago following an unknown follow-up procedure should wake up the entire country! She had replaced Dr. Curry on the medical staff at the prison, and was just settling in on her professional career when she, too, died early in the morning. Dr. Thompson was also not ill and was fit and full of life.

Bahamas Press wonders who will now investigate these great mysteries unfolding down at the Fox Hill Prison, which has also seen three prison officers die in a single month. These deaths have left persons wondering what has really gone wrong at our correctional facilities?