Another bloodbath set to rock FNM as plot to remove Butler-Turner  and replace with Laing is revealed….. 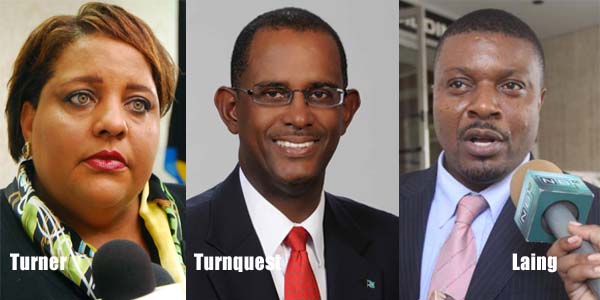 Nassau, Bahamas — This is breaking, earth shattering news coming out of the Free National Movement, which tells us Loretta Butler-Turner is being backed to run for the leadership of the Party at the next Party Conclave.

In what some claim is a huge turn of events in the Party, amazing hard-line supporters of Hubert Ingraham are now behind Loretta, but here’s where the plot thickens.

We can confirm Ingraham’s key policy speechwriter, Theresa Butler, is indeed creating material for Loretta for the upcoming convention and is preparing much of her material for Parliament.

The team, we are told, will then block Loretta’s bid in a vigorous and viperous defeat against Dr. Hubert Minnis, thus toppling and dumping the ‘slapper’ out of the running for Party’s future and ultimate succession to the throne.

During the visit of Owen Arthur to the country, Ingraham told the  former Barbados Prime Minister that his true successor after Dr.

After finding it tough to handling serious questions over his salary in the Senate, Laing, however, ditched the FNM – proving he is an Abandoner and is committed to no one, not even the church where he used to preach before 2007 elections!

And, since resigning and leaving the people of Fort Charlotte for a second time, Laing has engaged a PR firm out of the United States to craft his Lying Laing Returns to the FNM Deputy Leadership Campaign. We can see the writing on the wall of that campaign as Laing is really committed to no one not even country!

FNMs are in need of committed leaders, and should begin looking closer to the person who best suits its current heir apparent Dr. Hubert Minnis.

The organization needs someone who could join a Minnis who is loyal, committed to people and country. Someone who has long ties to the FNM and will support the organization as a teamplayer.

Officers and Members that it is TIME FOR TOMMY T – AGAIN!

Since Loretta will fall for the trick and now is deep in bed with the  plot being written by Theresa to get her out of the Deputy post, we  warn early the Turnquest family that this is the time to RISE UP!

We ga do this one for LADY T – TOMMY TURNQUEST FOR DEPUTY LEADER OF  THE FREE NATIONAL MOVEMENT!!!!

CHANGE IS ONCE AGAIN HEADED WITHIN THE FNM>>>