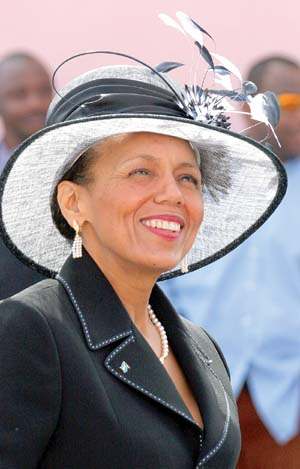 Our Lady of the Senate spoke last this past week on the Prescription Drug Bill. Today, Bahamas Press shares with you, our 4 million monthly global audience, the contribution of Madam Senator, Allyson Maynard-Gibson.

SENATOR MAYNARD-GIBSON: I begin by addressing some of the misleading statements of Senator Higgs:
•    This is NOT a national health insurance plan
•    There is nothing in the capital expenditure allocation in the 2009- 2010 Budget for a hospital
o    Nothing in Works
o    Nothing in Health
o    Nothing in PHA
o    She should find the allocation or withdraw her suggestion that the government is going to build a hospital or clarify that YET AGAIN it is talk and NO ACTION. Talk is cheap. Money builds hospitals and provide 21st century health care.
•    The fact is that the Health capital allocation is DOWN  by almost $2M
•    The fact is that this Bill DOES cost. It is NOT FREE. The FNM  itself has said that contributions of 1% will have to be made by employed, self employed and voluntary members.

I was waiting for the good Senator as an educator to decry the shameful state of education and health care in The Bahamas. Both are in shambles. This is important to note and URGENTLY address. It is not a political matter. It is a matter of SURVIVAL of Bahamians in the 21st century.
——-
The famous U.S. actor and vaudeville performer Will Rogers once said “The health of a nation is more important than the wealth of a nation”.

We have a service oriented economy.  So that our economy may develop and flourish, we must invest in our people.
The FNM in its 1992 manifesto, the FNM promised to ensure that affordable private health insurance was available and to monitor the insurance industry to make certain that reasonable fees and premiums were in effect.  It did not do so.
In its 1997 Manifesto II.  The FNM promised “to enact legislation to provide a National, contributory, fully funded catastrophic health Insurance Plan”.  It did not do so.

This CDPDP is woefully inadequate.
Bahamians are sensible people.  We know what is real and we know smoke and mirrors.
What Bahamians want and what we need  is a comprehensive national health insurance plan.

We do not need game playing especially with our most important resource, our people.

The Government will, for an unspecified period of time, pay for prescription drugs for certain categories of people.  The medical establishment has already pointed out that all of the chronic diseases are not covered.  Further, serious questions arise as to how a contractual relationship will exist with pharmacies and most especially since the Pharmacies Act has apparently not been brought into force And a very serious question arises as to whether Government or the patient’s doctor is to decide which drug will best treat the condition suffered by the patient.  The Government has taken a one size fits all approach to medication for the various disorders. [talk about the various drugs available for hypertension etc.]

I do not agree that we as a nation of 360,000 people cannot afford a comprehensive national health insurance plan.  Further, I reject the suggestion that experts said that we could not afford a National Health Insurance Plan.  They and we too recognize the need for careful monitoring of cost and service.

A nation of 360,000 people is smaller than many multinational companies.  These companies provide insurance for their employees because they recognize them to be a vital resource.  This Government in failing to recognize Bahamian people as our most vital resource is demonstrating that it is not a Government of and for the people.

I say that we can’t afford not to have comprehensive National Health Insurance UNLESS we are representing and protecting special interests such as:-

More importantly though, we should provide health care that will prevent and treat  chronic and other diseases.

I see that the government is planning to educate about healthy lifestyles. The government has a credibility problem. Ministers in this government know that people who, in pursuit of good health, were daily walking and running the full length of one of the nation’s beaches OVERNIGHT had that option cut off. When some of these Minister’s were asked about it, they said NOTHING!!! The scores of people in beach crew are waiting for action.

These Ministers walk Goodman’s Bay Park and beach most mornings. They see that the Park and pathways are not cleaned and maintained. They see that the Beach is not clean and needs to be renourished. What have they done about it? NOTHING. The hundreds of Bahamians who ARE trying to maintain good health are watching and waiting for action.

People who have cancers and serious, debilitating illnesses (such as colon cancer, lymphoma, lupus, rheumatoid arthritis) and others not on the list are waiting for action.
Pregnant women, are waiting for action. Pregnancy is the time when women seek medical attention for them and their unborn babies. It is also a time when proper medical attention is CRITICAL for unborn babies.

Young people who are over 18 and not enrolled in a full time course of study are waiting for action.

Bahamians who are having cook outs for medical expenses are waiting for action.

Like the Downtown Nassau Redevelopment Plan approved by the Solomon and Mackey Committee; the Straw Market; Urban Renewal and many other transformative plans for the benefit of Bahamians, the comprehensive NHI plan was stopped and cancelled.

Bahamians understand that we have to pay for a comprehensive NHI. This is just like National Health Insurance. It requires a government to take steps in the best interest of the people. The 2006 Act that was passed unanimously by BOTH Houses of Parliament was such a Plan. It was an affordable plan that would have to be implemented in Phases.

When the FNM voted for NHI in 2006 it didn’t think then that it was a political ploy. The FNM knows of the EXTENSIVE consultation with international agencies, the private sector and the medical profession. It is disingenuous and simply false to suggest otherwise.

The time is NOW to implement NHI. Bahamians understand that we must prioritize. Good health is a NEED. We understand, because we see it every day, you pay for good health. You pay now or you pay later. It is better to invest now in NHI rather then lose everything as possibly suffer bankruptcy later if a family member suffers from a catastrophic illness.

The FNM ADMITS that it own drug plan will cost Bahamians. There WILL BE a 1% contribution from employed, self employed and voluntary members. Bahamians are ready for and expect BOLD steps – bold transformative steps like NHI. If you are going to pay 1% pay it for NHI, including prescription drugs.

It was an eye opener for me to have a doctor who is doing residency at PMH tell me that Consultants “torpedoed the PLP’s comprehensive national health plan”. The doctor told me that the consultants have significant private practices that are businesses, and that PMH frequently contracts them for services. The NHI plan would mean that these services would have to be performed for a much reduced cost. This much reduced cost would affect their “bottom line”. So, what they did was say to the Residents and other physicians, “you see how the PLP doesn’t want you to make any money”. The physicians themselves realize that something MUST be done about PMH. The services there do not meet 21st century requirements.

The government MUST pay the doctors and nurses a salary that enables them to live comfortably and focus on patients in PMH rather than rush out to their private practices. Other benefits such as medical insurance MUST be a part of their remuneration.
Diagnostic and other support should also be available as a part of the PMH facility. This is especially so if PMH is to be taken seriously as a teaching hospital.

People in Exuma still look forward to the PLP’s plan of a mini hospital for the Southern Bahamas in Exuma. This facility would have been supported by the Emerald Bay and other resorts in Exuma. They, like all residents, want a facility that will be able to cope with Emergencies and other essential care. These Resorts all realize that a key part of their marketing strategy for tourists and second home owners is the ability to market emergency and other essential care. Persons can be managed and stabilized until they can be airlifted, if necessary. The resorts in the Northern Bahamas also looked forward to the improvements coming to the Rand Memorial Hospital and the upgraded clinics in Abaco.

This is not pie in the sky. If we are to be serious about medical tourism, the facilities are NECESSARY.
Give the IMF example re increased taxes.

The framework exists for comprehensive NHI. It was UNANIMOUSLY passed by BOTH Houses of Parliament in 2006.
NOW is the time for its implementation.

If given a choice between dredging the harbour for almost $100 Million for a cruise ship that might not come to Nassau and a new hospital, Bahamians will choose the new hospital.

If given a choice between paying non Bahamians almost $100 Million to build unnecessary new road corridors and improving the 19th century type facilities at Sandilands and the Geriatrics hospital AND ensuring that essential equipment and medication are available to the government owned facilities, Bahamians would not choose to send our good money out of the country while we and our families suffer.

I support this small start. It is a baby step in the right direction. I call upon the government to act in the best interest of Bahamians by implementing the comprehensive NHI plan that it voted for in 2006. If the plan needs to be adjusted just say so and come back to the people. Access to and provision of quality health care are RIGHTS not PRIVILEGES. We cannot wait for more Bahamians to die because they cannot afford medical care. The time is NOW to Act for Bahamians.

People are our most important resource.