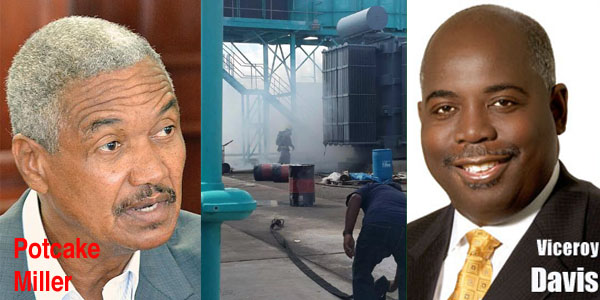 Nassau, Bahamas — Opposition leader Dr. Minnis showed that he was the one who was totally confused when he opened his mouth on the BEC incident and proved not to know the difference between “WHAT” and “WHY”

In his comments to the press over the weekend in the wake of the fire at the BEC Blue Hills power plant and subsequent blackout, BEC Chairman Leslie Miller said “WHY” he thought the fire took place. He said it was the result of a lack of preventative maintenance of the power plant over time by negligent staff.

In a prepared statement released to the media on Tuesday, Deputy Prime Minister Philip Brave Davis explained the preliminary facts of the incident as he understood them. The statement said a faulty cable caught afire, broke away, fell into a cable trench, causing other cables to catch fire. The statement also said that nothing the staff did on the day of the fire directly caused it. It took workers until Sunday to fully restore power to affected BEC customers. In other words, the DPM explained “WHAT” happened. No judgment, no supposition, no opinion, no blame, just the unvarnished facts surrounding the incident.

Everybody was clear on the incident right up until Dr. Minnis opened his mouth to the press later on Tuesday accusing both the BEC Chairman and the DPM of giving conflicting reports on the BEC incident. The problem is that Dr. Minnis clearly does not know the difference between “WHAT” and “WHY” nor can he decifer between an opinion and a statement of fact.

Miller rendered an opinion, blaming the workers while Davis stated the facts and poor Minnis could not determine or decifer the difference.

Successive Prime Ministers and their governments have had their share of challenges with BEC, but Dr. Minnis has a more fundamental and much more serious challenge – the poor fellow does not understand very basic English.

I think his interest would have been better served had he remained quiet and allowed people to speculate about him rather than to open his mouth and remove all.