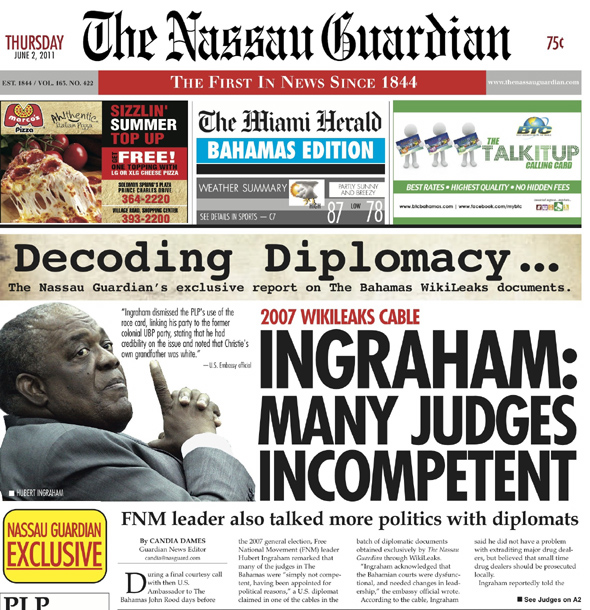 During a final courtesy call with then U.S. Ambassador to The Bahamas John Rood days before the 2007 general election, Free National Movement (FNM) leader Hubert Ingraham remarked that many of the judges in The Bahamas were “simply not competent, having been appointed for political reasons,” a U.S. diplomat claimed in one of the cables in the batch of diplomatic documents obtained exclusively by The Nassau Guardian through WikiLeaks.

“Ingraham acknowledged that the Bahamian courts were dysfunctional, and needed changes in leadership,” the embassy official wrote.

According to the cable, Ingraham said he did not have a problem with extraditing major drug dealers, but believed that small time drug dealers should be prosecuted locally.

Ingraham reportedly told the ambassador that cases move too slowly and many criminals are out on bail committing new offenses.  “He also noted that Bahamian prosecutors are often wary of taking high profile cases to jury due to possible tampering, and that in non-jury trials the maximum sentence for a drug offense is five years.”

The cable revealed that Ingraham and the ambassador sparred over the case of five baggage handlers arrested in December 2006 in Florida on suspicion of drug trafficking.

“Ingraham made it clear he believes the Nassau Flight Services baggage handlers were set up,” the cable said.

“The ambassador stated that the training (the baggage handlers were going on) was routine, as others went and came back, adding that if individuals who commit crimes against U.S. law come to the U.S., they will be arrested.”

The cable said Ingraham stated that his sources at the airport indicated otherwise.

He further indicated that if he was prime minister, the arrests occurring in this manner would have caused a serious bilateral issue, according to the cable.

Ingraham was quoted as saying, “If they committed the crimes here, they should be tried here”.

The cable said he did not dispute the right of the United States to arrest them once they had entered U.S. territory.

In the end, the ambassador and Ingraham agreed to disagree on the manner of the arrests.

According to the cable, Deputy Chief of Mission Dr. Brent Hardt noted that other baggage handlers who did not travel to Florida in December had been picked up by the police but had not been charged.

He asked Ingraham how he would respond as prime minister if individuals engaged in such acts were unable to be prosecuted.

It is then that Ingraham allegedly made the comment about the dysfunctional court system.

“The opposition leader pledged that, if elected, he would make improvements in the Bahamian judiciary to speed up trials and get more criminals off the streets, the cable said.

The state of the judiciary was just one of several issues Ingraham discussed with the Americans, according to that cable.

Discussing aviation, Ingraham reportedly promised to work closely with the Federal Aviation Administration on aviation issues if elected, and stated, according to the cable, that he “knew where his bread was buttered.”

The cable said the ambassador raised the issue of airport security and safety problems with Ingraham, stating that he remained concerned by both security vulnerabilities and overall airport management.

He told Ingraham that he would support the imposition of a 90-day review period for the airport if no progress is made on addressing long-standing security concerns, though he acknowledged that the government did now appear to be giving the issue serious attention, the 2007 cable said.

Ingraham reportedly asked the ambassador to elaborate on the problems.

The cable said: “Not needing any further prodding, the ambassador outlined several problems, including: The aesthetic appearance of the facilities, the slow pace in processing passengers, radar problems, and endemic security concerns.

“Ingraham stated that Minister of Transport and Aviation (Glenys) Hanna-Martin was ‘out of her depth’ and that there is no direction being given to civil aviation.”

The cable said charges that his government had purchased a radar system that did not work (the ASR-9) concerned Ingraham.

He reportedly noted that his government had purchased the system upon a U.S. recommendation, and added that if he wins the election, he would make changes at the airport, to include getting the new radar system repaired and on line.

The cable said Ingraham also stated that he supports FAA running the Flight Information Region, observing that he had learned through hard experience that it would be too risky to defy the U.S. on such a sensitive safety issue.

The Christie administration had pledged to gain full control of The Bahamas’ airspace and had promised that such an effort would result in tens of millions of dollars in additional revenue for the government. However, this was never achieved.

The cable said that turning to the political scene, Ingraham observed that he would support Progressive Liberal Party (PLP) leader Perry Christie (then prime minister) for many jobs, but prime minister was not one of them.

As he did when he sat down with a U.S. diplomat in 2003, Ingraham in 2007 described Christie as “fatally disorganized and incapable of running a government.”

The cable noted that the day before the meeting with the ambassador, the press widely quoted an exchange between Christie and Ingraham in which Ingraham referred to Christie as “impotent.”

“Ingraham wryly noted that he was referring only to matters of governance,” the cable said.

“He said that in his view, the PLP believes it has ‘the right to govern’ and that the FNM victories in 1992 and 1997 were accidents.

“He expressed the view that some of the investment projects such as Bimini Bay were too large, and that the environmental bureaucracy was unworkable.”

Despite prodding, neither Ingraham nor Desmond Bannister, then chairman of the FNM, would reveal the FNM’s budget for the upcoming election, the cable said.

It noted that parties are free to take money from any source, and Ingraham said that most of the money comes from businesses.

Persons outside the country can also contribute to parties, and he said that normally only outsiders with interests in The Bahamas do so, according to the cable.

“Ingraham also said that he had enough money for the campaign, but not all that he could use. Typically, money tends to flow in at the last minute when it is too late to deploy effectively, he pointed out,” the cable said.

Observing that the PLP was running many more radio advertisements than the FNM this early in the campaign, he reportedly suggested that this reflected their anxiety about the election.

Much of the money used for campaign paraphernalia is actually spent in the United States to buy T-shirts and hats, he noted, according to the cable.

The cable said the FNM leader said he expected a short campaign of 24 days, with elections called soon after Easter.

Ingraham provided the ambassador with a “scorecard” of key races to watch to determine the outcome of the 2007 election, the cable added.

“In Fox Hill, he predicted that if the PLP wins that seat, they are going to probably win the election, but he also felt that Foreign Minister Fred Mitchell would be defeated by his candidate,” the cable said.

“He also noted his surprise that Tourism Minister (Obie) Wilchcombe may be in trouble in his own constituency.

“On the other hand, if Housing Minister Neville Wisdom is reelected, that would be a sign the PLP was on its way to victory.”

The diplomat wrote in that 2007 cable that the FNM expects to win the Exuma seat being contested by former Bahamian Ambassador to the U.S. Joshua Sears.

According to the cable, Ingraham noted that the polls in 2002 were more accurate than often acknowledged, adding that the lesson from that campaign was that undecided voters usually broke against the government.

“Polls are now being taken on the larger islands, but Ingraham refused to divulge the results,” the cable said.

“Ingraham said the PLP strategy was to increase the negative perceptions of him and make him a central election issue.”

The American diplomat wrote that Ingraham is a very polarizing figure and PLP ads are clearly targeting him personally.

“(Ingraham) alluded that many people are personally benefiting from the PLP government and do not want the gravy train to end with an FNM victory,” the cable said.

“Ingraham dismissed the PLP’s use of the race card, linking his party to the former colonial UBP party, stating that he had credibility on the issue and noted that Christie’s own grandfather was white.”

In the comment section of the cable, the American noted that Ingraham is “always engaging and never at a loss for words.”

“Ingraham seemed very comfortable on the issues and did not shy away from disagreeing with the ambassador, as in the case of the airport arrests,” the cable said.

“While he pledged cooperation on aviation issues and promised to make the judicial system work better, he also made clear he would not hesitate to disagree with the U.S. if he felt Bahamian interests were not being well served.”

The diplomat added:  “Ingraham conveyed the self-assurance of a leader who has been in charge before and believes he soon will be again.

“From the United States’ perspective, an Ingraham-led government would likely abandon the PLP’s sympathetic posture toward Cuba and might be less interested in engaging China.

“Ingraham would also give us an interlocutor willing and able to make decisions and follow through on them.

“His ten years as prime minister have given him a good understanding of the United States and how to work with us, and he certainly looks forward to maintaining our traditionally close relations.”

The CHIEF IS A LEAK!