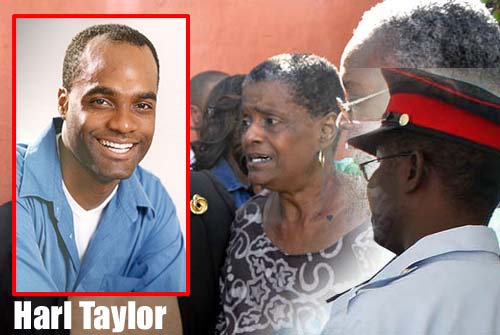 Harl Taylor’s mother Beverley Taylor (centre) would be one step closer to resting, as police is now questioning one of their own in the murder of her son. Bahamas Press believes officers of the RBPF are now finally on the right road to rapping up this murder.

Nassau, Bahamas: After months of investigating, Bahamas Press can now confirm, that police has finally questioned and detained one of their own in the murder of fashion designer Harl Taylor. Just short of us calling his name, police caught up with the officer whom Bahamas Press reported was on leave following his discovery of Taylor in his Mountbatten home.

Bahamas Press – unlike the roller coaster riding members of the ‘Wutless Media’ – will be an established source for news when the officer is brought before the courts, possibly sometime later this week. Bahamas Press first broke the news of the officer following information from our ‘deep-throat’ in the Royal Bahamas Police Force [RBPF]. Our source has now confirmed that the officer was detained at the Police Headquarters on East Street on last week.

In an earlier report Bahamas Press had confirmed that the young officer discovered Taylor dead in room and called investigators to the scene of the crime. The junior CID officer also briefed investigators upon their arrival. The source also confirmed that the officer wore plain clothes and at the time had driven a police vehicle to the crime scene.

The young CID officer is also reported to have driven from the scene of the crime a friend of Taylor who wept uncontrollably the morning of the discovery. Eyewitnesses, the source said, who were at the scene on Sunday morning, reportedly asked the young officer why was he in and out of the residence [Mountbatten House] and asked if something was wrong. One response given to a worker of GrayCliff Restaurant by the young CID officer was that nothing was wrong. Meanwhile Taylor was dead – body mutilated in his bedroom. The source also revealed that blood was everywhere in the resident when police and detectives arrived on the scene. At this time the young officer appeared agitated and was seen answering calls on his cell phone and in a hurry to drive off in his police vehicle.

Bahamas Press cries shame on members of the WUTLESS MEDIA, who suggested first that one suspect was in the hotel business, which failed to show up for work the morning of Taylor’s Murder (THAT WAS A GOOD FICTIONAL STORY JOHN MARQUIS). Then later the ‘DEFLECTORS OF TRUTH’ in this country followed a bulletin sent out on Troyniko McNeil who has been charged for the murder of Taylor following his deportation out of the United States for a visa infraction. Then another publication suggested that it was some banker who leads a double life. They were all good stories that lead police and the public in circles.

Bahamas Press suggested then, as we now believe still, that McNeil was simply another name thrown out in this case. And finally, following this latest breaking update in the case, it is believed charges will be dropped against McNeil. And an officer finally brought before the courts.