Nassau, Bahamas — Another school and government facility have been ransack by thieves.

BP is reporting the Doris Johnson High School is the latest government facility to experience such as four hooded men tied up the sole security officer on the compound and vandalized the facility.

A number of items were stolen and the police don’t have a clue who committed the crime. Police say the incident occurred around 4am and are asking the public for any assistance they may have. Where is the Damn Minister for Education? Out campaigning in Andros we could only guess. 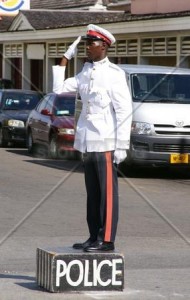 Bahamas Press has an update on that police shoot today:

BP can confirm the incident occurred around 1:33pm today.

A police officer was shot on Sappodilla and Thatch Palm Blvd as he was at his brother’s residence. While at the residence a Silver Grayish Honda Accord pulled up with three male occupants inside.

The men masked themselves as the officer began to run away from them. One of the men opened fire; hitting the officer in the thigh. He is now in stable condition in hospital.

It is with a deep sense of sadness and regret that the Commissioner of Police, Mr. Ellison Greenslade records the death of ASP Andrew Deveaux. Mr. Deveaux died at 2:15 pm on Saturday 31st March, 2012 at Doctors Hospital, Nassau, Bahamas. At the time of his death, ASP Deveaux was attached to the K-9 Unit.

Condolences are extended to the family of ASP Andrew Deveaux.

Funeral arrangements will be announced at a later date.

In keeping with the Commissioner of Police 2012 policing plan, “Improving Community Safety”, officers of the Northeastern Division conducted operation, “Save Lives”. The operation was conducted between the hours of 7:00 pm and 12:00 midnight on Sunday 01st April, 2012 and resulted in eight (8) people, five (5) females and three (3) males being arrested reference to Threats of Harm/Death.

Police are investigating a shooting incident that has left a male dead. According to police reports shortly before 6:00 pm on Monday 2nd April, 2012 police received information that a male was shot at Dorsette Alley off West Street. Police responded and discovered the lifeless body of a male lying next to a wall with multiple gunshot injuries to the body. At present police are uncertain of the circumstances surrounding this incident and are appealing to members of the public who may have any information regarding this incident to contact police.

On Sunday 01st April, 2012 shortly before 3:00 am a shooting incident occurred in the parking lot of a local night club at West Bay Street which resulted in the death of a male. Police have identified the victim as 20 year old AKIO FRANCOIS BURROWS of SUMMER SET STREET. In reference to the shooting incident which occurred on Monday 2nd April, 2012 around 12:10 am at St. Albans Drive, police have identified the victim as 32 year old HUMPHREY TYNES of ST. ALBANS DRIVE. Police are investigating and are appealing to members of the public who may have any information regarding any of these incidents to contact police @ 919, 322-3333/4, the CENTRAL DETECTIVE UNIT @ 502-9991, 502-9910 or CRIME STOPPERS @ 328-TIPS.

On Sunday 01st April 2012 around 11:00 pm a traffic accident occurred at Cable Beach which resulted in the death of a male. Police have identified the victim as 18 year old LARRY LAVOUGHN FERNANDER of REDLAND ACRES. Initial police reports indicate that the deceased was driving a white Honda Accord, accompanied by three (3) others, east along Cable Beach( in the area of Goodman’s Bay Beach), when he lost control and collided into a tree in the centre of the median. Active police investigations continue.