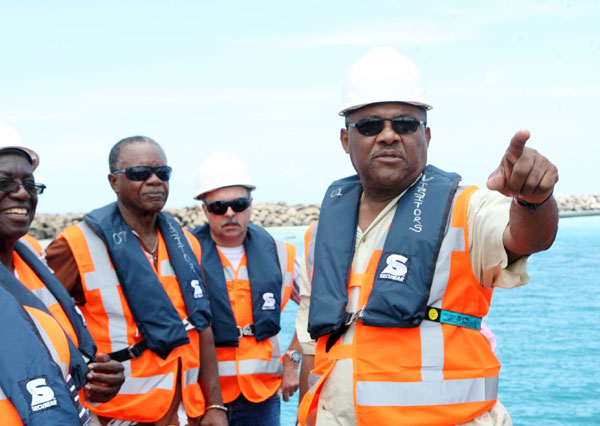 <<< Public Works and Transport Minister the Hon Neko C. Grant points to where one of the three mooring dolphins will be installed as part of the Nassau Harbor Port Improvement Project. Pictured from left are Permanent Secretary at the Ministry of the Environment Ronald Thompson, Minister of the Environment the Hon Earl Deveaux, Frans Thomassen Project Manager with Boskalis International BV and Mr. Grant.

He said dredging is scheduled to be completed by November.

Mr Thomassen last weekend took a team of officials on a tour of the Nassau Harbor and Arawak Cay port projects sites.

They were also shown the Ursa, the rock cutting self-propelled dredger to be used to move 1.9 million cubic yards of material from Nassau Harbor.

The $44.2 million Nassau Harbour Port Improvement Project is being carried out to accommodate the new mega Genesis Class Cruise Ships ‘Oasis of the Seas’ which is expected in Nassau in December on its maiden voyage. 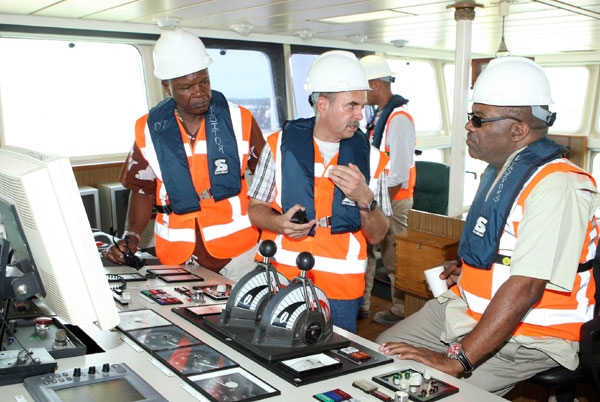 The Ministry of Public Works and Transport said the dredged material will be stockpiled on Arawak Cay for use in future Government projects. Some of it will be used to extend Arawak Cay by 1,000 feet.

“I am most pleased having toured the dredger,” said Minister Grant. “I have every confidence that the project will remain on schedule.

“The dredger has some five heads (instrument on the dredger used to cut rock). With this sort of preparation there is no doubt that we will proceed on schedule.”