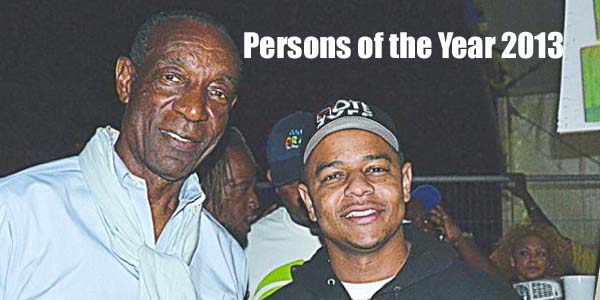 Operations that are a law to themselves – standing against a wicked Apartheid System against Bahamians … When smart people refuse to enter politics the punishment is that we will forever be ruled by the DUMB! HAPPY NEW YEAR!!!

Nassau, Bahamas – In an effort to recognize individuals who have changed the course of history and dominated the news cycle over the past year, Bahamas Press once again names our Person[s] of the Year – 2013.

Early in the year, the men campaigned to win the hearts of Bahamians to legitimately establish gaming for Bahamians and remove the vestiges of an Apartheid Law imposed on Bahamians by past governments.

Prime Minister Rt. Hon. Perry G. Christie and his PLP believed that the time was right to regulate and tax gaming in the Bahamas. The idea was not bad given the financial crisis and economic tatters the former Ingraham Regime left the country in.

The debt had grown, revenue had declined, unemployment had blossomed and by 2012 crime had hit an all time high.

Christie believed that Gaming was one way to garner greater revenue to run the country and deliver an even fairer balance to diminish discrimination in the Country. We at Bahamas Press cannot perceive the rationale behind the opposing groups who are hell-bent on allowing gaming to remain for foreigners, but not for Bahamians. In a modern Bahamas shouldn’t it be that we exercise equality in all we do?

If the tourist can gamble legally, why then is it illegal for a Bahamian to do the same? Are we still in the age where bathrooms, living rooms and restaurants are separate?

And what is even further interesting in this announcement today is the fact that even though this crescendo of “NO” Vote support was delivered at the ballot on January 28th, 2013, not one single authority has lived up to their pronouncements to close down the web shops or ‘Financial Shanty Towns’ in the Bahamas. Today, on December 29th, it is business as usual and those powerful operations appear to be immune to the law. And in our heads they operate like the second The Vatican City! Speaking about the church here is another thought.

We also credit the Number Boys for their ability to bring the church in the Bahamas together for the first time since 1967; that in itself was a miracle. For the first time in years, denominations came together in Rawson Square and campaigned against gaming unlike any other issue in the Bahamas. We still question the source of their campaign funding; however, that is another topic for another day.

We also credit the Number Boys for their tact and ability to confuse the politicians. Before Hubert Ingraham left office, he, we believe, delivered an election promise to regulate gaming following the 2012 campaign. Cabinet Papers presented on Bahamas Press showed where the Ingraham Regime issued most of the licenses to operate gaming in the country. His administration had also engaged public servants to began investigating the level of potential revenue derived from Gaming and had computers in the Ministry of Finance talking with the computers from the Financial Shanty Towns operating in the city. Ingraham was about to do the same thing Perry Christie embarked for gaming in the country. But in an about face – talking out of the third side of his mouth – the former PM decided to tell Bahamians to vote against the same operations he had issued licenses for. WHAT A COUNTRY!

The Number Boys left politicians on both sides of the political divide DUMBFOUNDED!

And in our quest to discover who are “these people” who have set up one of the most powerful economies inside the formal economy, we realized, since the January 28th Referendum, an even greater measure of no regulation is about to be granted to the Number Boys.

VAT is coming and, in its confused presentation to the Bahamian taxpayer, we have learned from those seeking its enforcement that Number Boys and their ‘Financial Shanty Town’ operations will be exempted from VAT Taxes – them and the Church.

And what amuses us is the fact that the “quiet majority” in the Bahamas has yet to say a word. Hmmmmmmm!

Added to all this, ‘Financial Shanty Towns’ have confused even the police as to what their true role is in the society – which is supposed to be to UPHOLD LAW IN THE LAND!

This responsibility [to uphold law] cannot be coloured by friendships or compromised by relationships. If the law says you cannot gamble, then one must beg the question why is it continuing – even though it is a damn Apartheid Law! But we are confused, the politician dumbfounded, the churches are together on this like nothing else and the police say where ya put me.

In the end the Number Boys have won the day and are henceforth named Bahamas Press’ 2013 Persons of the Year!