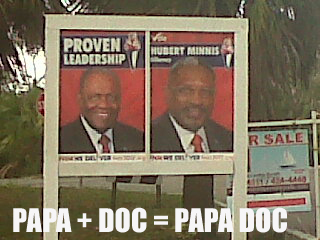 Nassau, Bahamas — Bahamians across the length and breadth of the country are being asked to plead the blood of Jesus just following the death of one of Tommy Turnquest’s campaign workers.

Just minutes ago, we are told a campaign worker for the Minister of National Security, Tommy Turnquest, fell off a ladder, broke his neck and died as he held a poster of Hubert Ingraham.

The worker, we can report, was making the rounds of the Yellow Elder area, putting up posters for the leader, when suddenly he fell off the ladder.

The victim collapsed to the ground and expired.

Reports tell us Tommy Turnquest was on the scene of the incident shortly afterward.

BP warns all persons putting up posters on Government lamp poles to do so with great caution. We warn persons to be careful in particular in tearing down posters. This also CAN BE DANGEROUS.