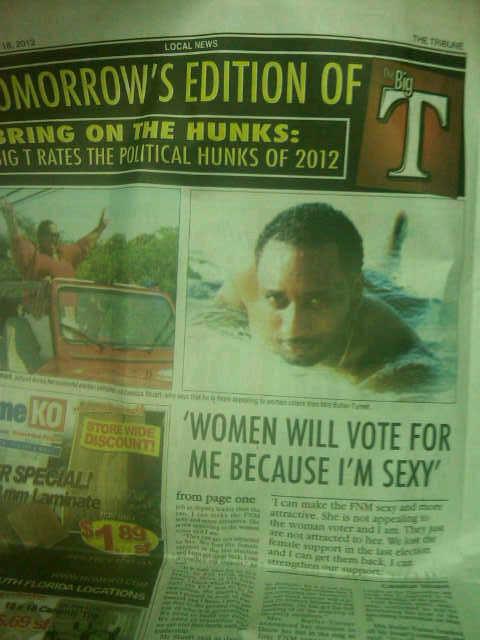 If walls could only talk! – FNM Candidate suggest Loretta has no SEX APPEAL TO MEN?

Nassau, Bahamas — A group of Cinderella men were having breakfast in Lums on Bay Street this morning reading the Tribune and wondering how they could get in contact with Cassius Stuart, the man who now wants to be deputy leader of the FNM.

Stuart was featured in a photo, posing half naked in the water, suggesting that he is sexier than Loretta Butler-Turner who is also seeking the post.

Now isn’t that incredible? The FNM has moved from the debate of Leadership qualities to who has sex appeal. My Goodness!

The question the contenders for the deputy post of the FNM should be asking is WHO GAT MORE BALLS and who is more man!

Dr. Hubert Minnis don’t need anyone at his side who been to finishing school and is making a sex appeal argument. The FNM is in crisis! It lost the general elections! The Party must rebuild. At this point the Party cannot get 23,000 supporters to vote for them even if it was to save the life of the Party. They are in Trouble!

The FNM needs new structure. New, dedicated and serious players with strong and compelling voices in order to cleanse itself from the arrogant JACKASSES who led the organization into defeat!

The last thing it needs now is a balls-less, spineless wimp who does wrestle in hotel rooms through the night.

Boy, if walls could talk!