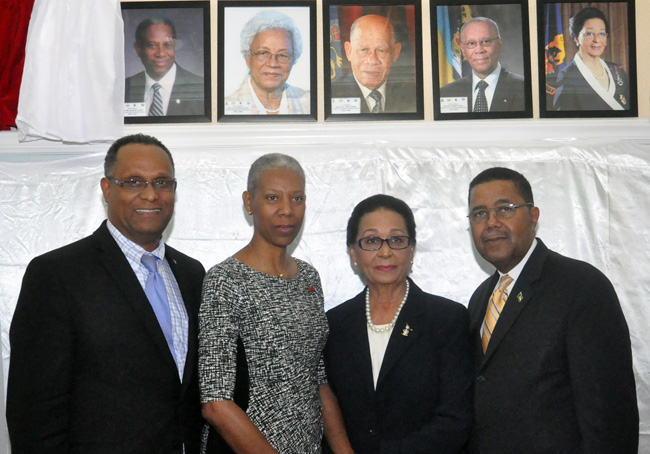 The occasion was the annual visit by the Governor General of the Commonwealth of The Bahamas, Her Excellency Dame Marguerite Pindling, to the Rand Memorial Hospital.

It was Dame Marguerite’s first official visit to the Rand Hospital since being sworn in as Governor General earlier this year.

Minister Gomez said: “Dame Marguerite, the tradition that we continue to speak to, is what makes this time of the year, so special. During this holiday season, while so much attention is given to the festivities of fellowship with friends and loved ones, a great deal of attention is also spent on charity and acts of kindness to our less fortunate brothers and sisters.

“Your Excellency, your presence also affords us an opportunity for reflection. The men and women of the Grand Bahama Health Services have achieved much throughout the past year; at times through challenges and hardship and at times in joy and triumph, but always with the spirit of camaraderie and teamwork.”

He drew attention to the recent plane crash on Grand Bahama pointing out that the outstanding staff at Grand Bahama Health Services was put to the test at the instance of what may be described as a national tragedy, when nine upstanding Bahamians met their untimely death by way of a plane crash.

“Our first responders, clinical, support and administrative staff performed their duties in the most professional and flawless manner to help the surviving relatives and friends navigate the challenges of the immediate aftermath with compassion and understanding. I thank and highly commend them for their services,” Dr. Gomez stated.

He also had special commendation for the pathologist on staff at the Rand, and he pointed out that The Bahamas has two Bahamians who qualify as Forensic Pathologists, the other is on staff at the Princess Margaret Hospital in Nassau, and they are both female, brilliant young women, he noted.

“These are pathologists trained at the highest level in their field. We looked for other [such] pathologists through the region and there is only one other Forensic Pathologist in the entire Caribbean, but we have two,” he said to an applauding audience assembled in the Foyer of the Rand Memorial Hospital.

Continuing, Dr. Gomez informed Her Excellency and others assembled for the special visit that January 2015 will mark the 43rd Anniversary of the Rand Memorial Hospital and Grand Bahama Health Services.

“Our delivery of service continues to expand to higher levels of excellence, notwithstanding our challenges,” he said.

In his remarks welcoming the Governor General, the Minister for Grand Bahama said that the health and well-being of Grand Bahamians remains a priority of this administration.

“As we move to implement universal health coverage for all Bahamians the advancement of both primary and tertiary health care infrastructure is paramount going forward and the delivery of quality public healthcare services for all Grand Bahamians is absolutely necessary.

“This administration, through Our Vision 2030 has developed a plan to establish a modern, responsive healthcare infrastructure for Grand Bahama, which falls under the portfolio of my Ministry, the Ministry of Health and the Public Hospitals Authority.

“I am pleased to inform you that we are working together as a unified team to accomplish this important mandate during this term in office,” Dr. Darville said.

He also pointed out that since 2012, the clinics in Sweeting’s Cay, McLean’s Town, High Rock, Hawksbill and Eight Mile Rock have undergone major renovations and modernization to meet the needs of a growing population in East and West Grand Bahama.

“As a government, we have established the strategic framework for healthcare reform throughout the country and we are moving forward with zeal to ensure that the healthcare system on Grand Bahama is modernized, adequate and responsive to the needs of residents and visitors alike.

“As a physician myself and one who practiced in this community for many years, I am proud of our healthcare team in the clinics and at the Rand Memorial Hospital.

“We still have a lot of work to do and must continue to invest in training, but despite our challenges I am excited about the direction [in which] we are heading,” the Minister for Grand Bahama said.