Could destruction to beach raise the threat of Cancer concerns with Beach-goers?

Editorial NOTE: A company connected to Lynn Holowesko is planning to close Goodman’s Bay from the public to facilitate a pipe to facilitate Baha Mar construction. BP is asking the question, when the pipe is laid, will it threaten beach-goers and raise the threat of Cancer?

Cable Beach Is Being Destroyed!

I was called foolish. After all, the Army Corps of Engineers had said it was ok. Furthermore, the developers had been required to deposit one million dollars, which would be used to restore the beach if by any chance they were wrong.

Years later the beach not only eroded but the tower built on the beach became unstable. A groin was extended across the beach to save the hotel but in the process further destroyed the beach. Before retiring from the House of Assembly, I pointed out the destruction and asked where the million-dollars to restore the beach was. The reply was, “what million-dollars?”

My conclusion was that it had either “gone South” or had never existed.

We now fast forward to today and Bahamar, which is funded by the China Export Import Bank. All their advertising has been that they were to remove the offensive structures and “restore the beach.” On close scrutiny, however, one will find that they are in the process of “destroying” the beach, not “restoring” it.

The PLP will say that the FNM caused it; the FNM will say the PLP caused it. Who cares who caused it? It is happening and must be dealt with now.

Following is a letter I received concerning what is happening to Cable Beach. Please read it; absorb it; cry; and demand that your representative do something about it. Remember, this is our country that God gave us to hand onto our children. The foreigner is welcome to share it with us, but not to take it from us.

In April 2012, The Bahamas government celebrated Coastal Awareness Month, and Bahamians were urged to protect the coasts.

Ironically, in May 2012, Bahamar began the systematic destruction of Cable Beach to reclaim land for an artificial beach and pool deck called the Bahamar Pools.

The new pools are being built right on top of world famous Cable Beach, in similar fashion to the Crystal Palace pools that destroyed the beach in the 1980’s. That same structure prevented Bahamians and visitors alike from walking the entire length of the beach, and caused erosion in front of the Nassau Beach Hotel.

While the Government lectured Bahamians about the importance of the coastal areas, they gave a foreign investor, whose principals live on private beaches in Lyford Cay, permission to mutilate and permanently destroy Cable Beach – one of the most important coastlines in the entire Bahamas, and one of the most beautiful beaches in the entire world – and build a wall that discriminates against Bahamians by keeping them off the beach in their own country!

In April 2012, Perry Christie told the Bahamian people that his PLP party cared about Bahamians, and HE promised that IF HE WAS ELECTED Prime Minister, HE WOULD put Bahamians and The Bahamas first.

Flashback to April 2005 when then PLP Prime Minister Perry Christie also issued a press release through Bahamas News Services stating that the protection of the coastal environment was crucial to The Bahamas.

Prime Minister Perry Christie must now live up to his Coastal Awareness pledge in 2005, and the PLP must live up to their promises to the Bahamian people in 2012.

The government must IMMEDIATELY:
(1) REVOKE the Bahamar Pools beach reclamation permit,
(2) STOP the destructive beach land grab before it is too late to save the beach,
(3) Make the developer remove ALL of the boulders, wall and debris from the beach to give Bahamians back their rightful access along the natural beach,
(4) Make the developer demolish the Crystal Palace Towers, pools and lagoon as they originally promised so that the sand can flow back down the beach towards Breezes,
(5) Establish aggressive new setbacks that restrict construction far behind the dune that apply to all property owners along the entire beach including Bahamar and their proposed pool system.

The PLP started the destruction of Cable Beach in the 1980’s by approving the ill-fated Crystal Palace project.

Fortunately, Mr. Christie and the PLP are now in an ideal position to reverse the mistakes of the past by restoring the original dune system and natural beach from Sulgrave Manor westward to Westwind II.

If they reverse this destructive project, Mr. Christie and the PLP will go down in history as the government that gave this beach back to all Bahamians and all visitors, and restored the entire length of Cable Beach to its former glory – a shining jewel in our tourism product.

If they don’t, they will go down in history as the government that not only allowed the destruction of the country’s primary tourist asset, but the government that allowed a foreign hotel developer to take The Bahamas back to its segregationist past by using the PM’s Office and other government agencies to SEIZE a public beach, then claim it as private property to discriminate against ALL Bahamians.

The developer has already convinced the government to divert Bay Street, block Skyline drive, take the tree lined boulevard and park system that Bahamians loved, and exclude Bahamians from the entire area so that they could have all of that property to build their condo hotel and casino complex across the road and away from the dune and beach. They have no right to now take the public beach from the people.

In addition to stopping and reversing the destruction of Cable Beach, Mr. Christie’s government is also obliged to turn over to the public all information on (a) the Bahamar Pools project that has already destroyed almost a quarter mile of pristine white sand beach, and (b) the proposed OTEC and SDC energy project for Bahamar that will cut a large trench through Goodman’s Bay public beach, protected bay and barrier reef system — and let the public know what government agencies, and which Ministers granted the approvals.

The Bahamar pools beach reclamation project is destructive to the most important coast in Nassau, anti-Bahamian, anti-tourist, discriminatory and prevents Bahamians from enjoying their beautiful country – it should be reversed immediately.

The public and the media are urged to dig beneath the surface and see this project for what it really is – a land grab that has destroyed the natural beach to extend Bahamar’s property out into the sea.

Thank your for publishing this important information.

PS Following is the full text of Mr. Perry Christie’s March 29, 2005 press release about the importance of the coastal environment as published on the Bahamas government’s web site:

NASSAU, The Bahamas — Prime Minister the Rt. Hon. Perry G. Christie said Tuesday (March 29) that negative impacts on the country’s coastal resources are ‘more detrimental to the socio-economic development of The Bahamas than most issues’ because the entire country is a coastal zone.

The Prime Minister urged Bahamians and residents alike to take a more proactive approach in the preservation of those natural assets regardless of where they reside in The Bahamas.

‘We in The Bahamas are not immune to potential negative impacts to our costal resources,’ the Prime Minister said.

‘The challenge for all of us is that people do not see this as an exciting subject matter until there are differences of viewpoints (with regards to potential investment opportunities) and then you have public attention focused on these matters.’

Prime Minister Christie commended the committee for its initiative, saying The Bahamas is the first country in the region to implement an annual Coastal Awareness Month programme.

He said the primary focus of the month-long initiative will be to educate the country’s resident and visitor populations on the importance of preserving The Bahamas’ coastal resources for the present and future generations of Bahamians.

‘Unlike any country in this hemisphere, The Bahamas is positioned over 100,000 square miles of the most beautiful water, which contains the tremendous diversity of marine life that we both consume and derive tremendous pleasure from, for those of us who dive and who are able to witness the incredible presentation of nature,’ said the Prime Minister.

‘One of the key points of the month will be the Planning Committee’s endeavor to initiate national discussion on the need for a greater degree of sensitivity, and the need for a greater degree of educating Bahamians, residents and tourists alike on the importance of the connection between the quality of life we lead and the environmental policies and enforcement that we have in place to protect our future.

‘We know, for example, that it has implications not just to Bahamians involved in fishing and the methods they use, but also addresses poaching and has to do with our being able to have the capacity not just to be sensitive to those policies and initiatives we have to take to protect the species that we have in The Bahamas, but also to ensure that we have the capacity for our Defence Force to protect our waters from the invasion of poachers,’ he added.

Prime Minister Christie said that initiatives such as Coastal Awareness Month are crucial to ensuring that future generations of Bahamians have the same opportunities to experience and live in the kinds of pristine environments that currently exist.

The Prime Minister said he spent two days walking the beaches of South Eleuthera where developments are on board for Half Moon Cay, Jack’s Bay, Davis Harbour and Cape Eleuthera, to ensure that those developments do not in any way cause harm to the surrounding environment.

‘I don’t know if there are prettier places in The Bahamas – let’s say the jury is out, some people think not – because that is a place where you have the most beautiful beaches at the bottoms of cliffs and hills and absolutely incredible.

‘I wanted to walk these areas to have a sense of what exists and really to understand whether or not we were threatening the environment by any policies we have in place or anything we may have agreed to.

‘Clearly the issue of preserving the environment is a very important one for us and I really want to, on behalf of my government, join with you in truly commending this month and hoping that you will be able to reach the majority of our people as you move through this month,’ Prime Minister Christie said. 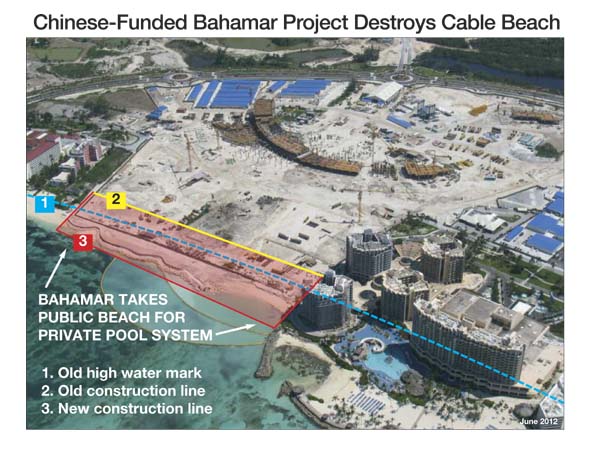 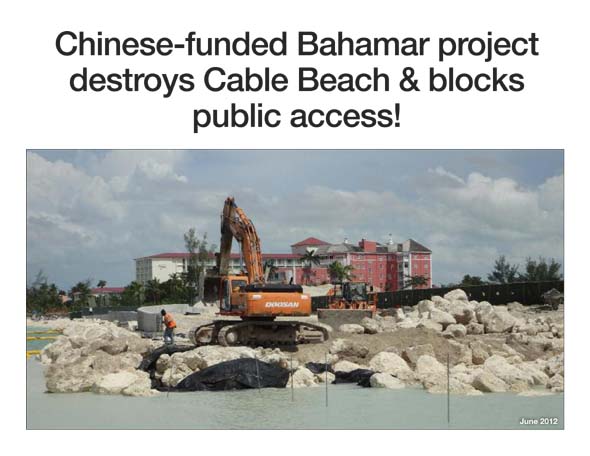