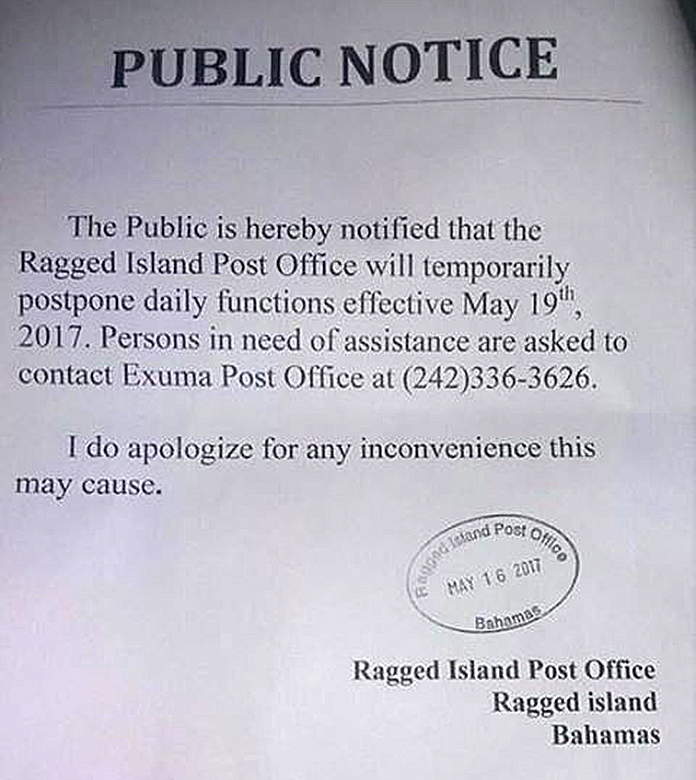 I’m being told by a family member in Ragged Island that the current Post Mistress for that island is **ABOUT TO BE ON** maternity leave. In light of her being off island, two persons who declined due to their own personal obligations were asked to fill in for her until her return. As a result of them declining, the below notice was sent out to the residents of the island. Bear in mind, there are no banks on the island and the Post Office is the only means of getting funds on and off the island.

In addition to the island being without a Post Mistress for three months (minimum), the only nurse on the island had to travel to deal with her own personal matters. She is scheduled to be off island for two weeks, and there is no substitute in place as she is the only nurse and there isn’t a doctor stationed on the island. A substitution should’ve been sent to fill in for her, but the residents are now being told that “they” (I’m uncertain as to whom they may be) “don’t have no money to buy grocery for her to come down there for two weeks.”

It is unfortunate that we have Bahamians living on an island where there is no way for them to send cash to or receive cash from loved ones, get medical attention if needed, or leave the island to seek medical attention should it not be available to them there, because there is presently no regular scheduled flight service to Ragged Island.

Awareness needs to be raised, because these people are our Bahamian brothers and sisters and they do not deserve to be treated like second class citizens.

BP editorial note: Its da PEOPLE’s TIME TO GET MASHUP!