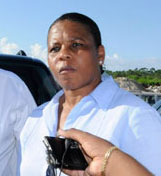 The comments attributed to me in this morning’s (June 10th) Tribune were a complete misquote of what was said to the reporter. I stated emphatically that I could not speak to the current conditions at the New Providence Landfill as I had not been there since management was assumed by the private company approximately three weeks ago.

I was asked, hypothetically I thought, of any adverse effects that can be experienced due to the conditions that were described to me. Based on what was described I spoke to what could happen and not to what was actually happening.

This was the extent to my conversation with the Tribune and any other comments that were attributed to me could have only been done in error.