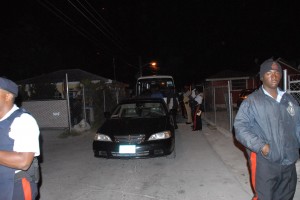 Police stormed Black Village after a midnight shooting on John Road, West of Hospital Lane around midnight. A young man was gunned down after over twenty shots were fired. Eyewitnesses said that the young man was rushed to Hospital in a private vehicle and that the gunman fled into Black Village.

An heavily armed elite unit of the Police, pulled in the front of the home of the local Justice of the Peace and Workers Party Leader, Rodney Moncur.

The elite unit them closed down three of the main streets which leads into Black Village and took a former Police reservist into custody.

The midnight shooting on John Road, west, was the sixth shooting for Friday night where multiple injuries is said to have taken place all over Nassau. The songs from the John Street shooting could be heard in Black Village

Police officials appears to be visibly concerned over the many shootings, which have taken place all over the Island of New Providence. Residents of Black Village could be seen in their yards looking at the heavy police presence.