Journalist Sherman Brown goes to Court #10 today in another case orchestrated by SAVE DA BAYS FOR A COMMITAL TO PRISON FOR SPEAKING!!! 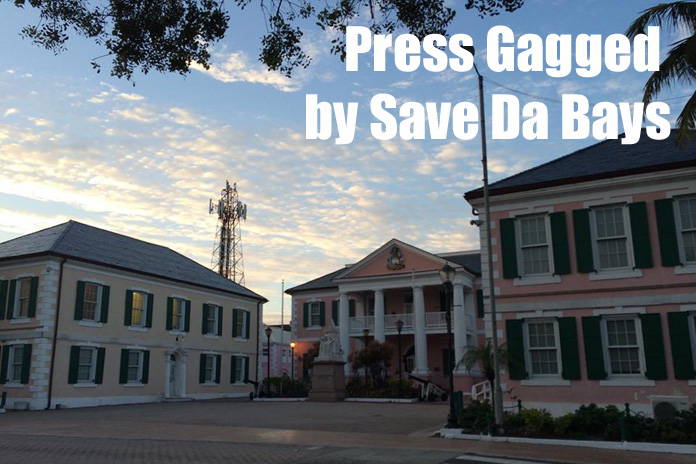 Where is the media now that Fred Smith has silenced them all? Thank GOD for Wendall Jones!

Nassau, Bahamas – The week in Parliament was not good for the opposition, particularly after Save the Bays emails were exposed. Minister for Education Hon. Jerome Fitzgerald last week Thursday enlightened the public on the group’s master plan to destabilize the Bahamas and bring low in the eyes of the public and the world the Office of Prime Minister and Deputy Prime Minister.

The vicious assault started when the supposedly environmental group revealed blazing pages of the March 10th, 2016 edition of the Tribune that a wealthy guest to the Bahamas allegedly masterminded a two-and-a-half year campaign of harassment, intimidation and violence in the Bahamas, including entering into a conspiracy to murder prominent local attorneys Fred Smith and Pericles Maillis, American investor and philanthropist Louis Bacon and Tribune Business Editor Neil Hartnell. The entire plot published was a damn LIE!

In fact, it was later revealed that the same said alleged criminal ‘hit men’ [Toogie and BOBO] had submitted a second set of affidavits denying to have done anything of the sort and was paid to tell a lie. Minister Fitzgerald revealed how a third innocent soul was lured in by the Save The Bays and crew, flew him into Cayman Islands to collect $50,000 to sign another affidavit, however, after he read the lie being perpetrated he declined and came back home.

In that same edition of the Tribune the newspaper went as far as attempting to pull the two decent leaders of the country into its web of deceit when in fact both had absolutely nothing to do with the concocted LIE crafted by Save da Bays.

Minister Fitzgerald then revealed in communications to the Parliament how members of environmental group had written emails attacking senior officers of law in the country including our DECENT Commissioner of Police in words written by a foreigner! This is not good!

And if that wasn’t enough we then discovered circulating on social media recordings of the former FNM Chairman – now axed like a tree by his leader – was working for Save Da Bays as he coached the lie in the Hilton Hotel on February 19th with two ex-agents trying to put legs on the lie reported in the Tribune.

And since the tabling of those unkind, damning and disgusting emails, everyone in the Save the Bays group appears to be hauling ass. The Grand Bahama based attorney – the mastermind behind the plot we believe – has since ran off to the courts like a ‘lil gal’; getting the courts to place a gag order to muzzle the WUTLESS MEDIA from discussing or publishing the emails tabled in the House.

The last time we checked, Freedom of Speech was still a protection in the Constitution and Parliament remains a HIGH COURT of FREE SPEECH! You would remember how Save da Bays was up and down in the country advocating Freedom of Information! But strange enough, when the information is all about dem – every man cries wolf!

Bahamas Press now calls on our most able and DECENT Attorney General Madam Allyson Maynard-Gibson to seek leave of the court to remove the BLACK DUTTY GAG on the Press and let us be free to report what is said in Parliament in this matter!

The Attorney General’s office has the most qualified talent in the region and we pay them handsomely to keep the nation FREE!

Bahamas Press believes in democracy! And we hope yall see why we don’t support touching the sacred document of the Constitution? Buy Michael Pintard a book and John Bostwick some bullets mixed that with power and Bahamians would go to jail for ‘pissin’ on the wall much less marching in robes plastered with the letters KKK!

It appears that these people in Save Da Bays hate democracy! And it appears that they hate free speech! Don’t mind a damn word dey say bout Freedom of Information! Free the emails if you have nothing to hide!

We also cry ‘dutty’ shame on members of the WUTLESS Media in the country! Not one soul this week lambastes Fred Smith for what he has done to the Press in the courts! THIS IS UNBELIEVABLE!

Not Nicky Kelly, Eileen Carron [who we believe piss her bed last week], The Punch, The Guardian and not a word from the Bahamas Press Club! NOT ONE save Wendall Jones uttered a word of protest over the move by Save Da Bays’ unconstitutional gag order! The environmental group pisses on the media as like a prisoner into a bucket and has denied them the opportunity to report the emails destabilizing the country.

They spent millions in a campaign against Bahamians! They do not serve the national good and Save The Bays License to function should be revoked and their accounts closed down! They posted caricatures belittling and degrading the high office of Prime Minister in the Commonwealth of the Bahamas! That alone should be an offense to every Bahamian!

But get this – yinner think all a ‘dem wutless’ media people are on the payroll to?! The emails do tell that story! They all stand guilty in their wicked silence?

But Stay Tuned THIS EASTER SUNDAY – our team is standing by. We don’t play!

Remove the GAG from our lips! DIS IS THE BAHAMAS!

It’s TIME TO SAVE DA BAHAMAS!