Nassau, Bahamas – One by one members of the Out-going Ingraham Government was spotted fanning the winds of compassion as they sought to bring relief to scores of illegal squatters whom lost everything to a fire in the Fire Trail Road area on December 26th.

Minister after minister was on the scene collecting data, profiling to suggest they have some level of compassion for the victims. We to at BP feel moved by the devastation after all we are all God’s children. Laws, however, are made to be kept, not consistently broken.

We understand an illegal number house was also burnt to the ground in the village and to this day the Minister for the Environment, Earl Deveaux, nor his junior, Phenton Neymour, have yet told the Bahamian people how did BEC pole #44 got erected in the centre of that community.

At a time when darkness and gloom is felt for many taxpaying Bahamians, one must wonder who in the hell this WUTLESS DUTTY mongrelize government of the day is looking out for? One must also wonder is the Government of the Bahamas condoning lawbreaking by the Haitian community?

While they move with compassion towards the Haitian village, where was the compassion for over 6,000 residents who were unplugged by BEC and thrown into blackness just week before Christmas in 2008? Don’t forget now they raised the rates by instructions of the Cabinet and they set the policy around the same table. That is what they did to Bahamians!

This same government, which now seeks to demonstrate compassion, could not find the same spirit when in 2007 it flung into the streets victims of the hurricane on Grand Bahama. The same Kenneth Russell, who now say he looking to assist the Haitians, was the same one who told Grand Bahamians they could not stay a day longer on private property and therefore they HAD TO BE EVICTED FROM THE TRAIL HOMES! Mother with baby sucking the breast were all kicked out and not an ounce of compassion by the government was given to them. That is what this WUTLESS GOVERNMENT did to Bahamian taxpayers.

No decent law abiding member of the Cabinet of the Bahamas should find themselves engaged in promoting lawlessness? And we expect no better from the SNITCH representing the PLP, after all he almost became a resident of one of these villages prior to 2002 after owing everyone and ‘dey mah’.

The other day a young struggling Bahamian single mother attempted to acquire a permit to sell hot dog near the Lyford Cay round a bout. The permit was granted but at the behest of some foreigner in the ‘Village’ of Lyford Cay, her license was revoked and she was chased from the area. The government departments are now tracing the Bahamian woman and the police consistently harass her no matter where she setup her stall. We wonder if these same officials traverse the Cow Pen Road area and see what I see. NO harassment there? Hmmmmmm! We need CHANGE! 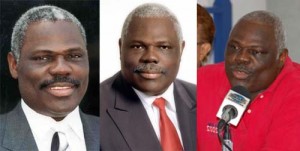 Cabinet Ministers are scrambling to assist, but no one remembered there was no one with the same urgency to assist the young students of the nation, who needed a grant from the government but could not get it cause this Wutless administration cancelled the programme and shut out the poor. Where were the ministers then? Ducking Bahamians!

The same could be said when they began a wicked plot to fire Bahamians in Government Corporations calling workers no good thieves, but now today under the same breathe, they all over the place getting ready to build shelters for lawbreakers. Bahamians might as well begin squatting all on the crown land near Gladstone Road and stop paying taxes.

Perhaps it is a change of the culture now in the Church Hill Building, which has promoted lawlessness now rocking the country. Following the earthquake in Haiti, Prime Minister Hubert Ingraham declared a suspension on the repatriation exercise of Haitian nationals. You would remember then Ingraham decided to release from the Detention Centre some 110 immigrants. Where are the 110 persons released at that time? Has the Minister of Immigration granted them citizenship? The country needs an update on this matter.

When we see the ‘SHAKY’ hand of this wicked government it is no wonder why lawlessness is the way it is all over this country. The Government is now condoning lawbreaking and they are all across the TV to show us who side they on.