Managers of the dump cannot manage the area 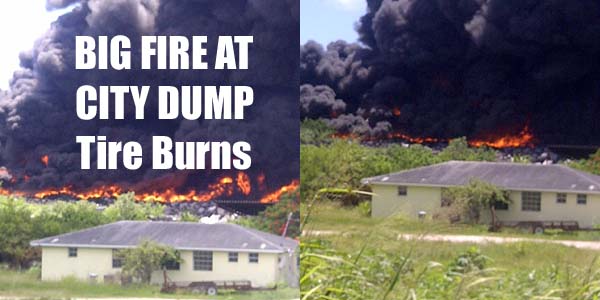 City Dump has a major fire almost every month!

Nassau, Bahamas –– Bahamas Press teams have just left a massive fire underway at the eastern section of the City Dump.

Just after 1pm today clouds of heavy, black toxic smoke bellowed into the sky as tons of tires and pallets caught fire.

Fire teams stood helpless while the fire – as wide as the National Stadium – quickly spread and shot high into the air.

“I knew it was not long before this happened. The people charged to manage this dump cannot mange a two cent candy store. Not only millions are owed to the Government out here, but every month there is some fire out here. Every month someone is catching something ablaze. And now the whole island must suffer from the fumes,” one onlooker told BP.

No one saw how the blaze was caught, but we know someone had to have their hands in this vexing problem.